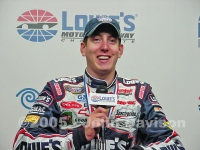 Kyle Busch in his Rick Hendrick days in 2005

“Trust me, my gut doesn’t feel good, and that’s not just for decisions being made, but more so of decisions being weighed and the perception in how you come across to all of those that you’re going to disappoint, right?” Busch said. “There’s going to be one winner, and the rest are not winners, if you look at it in that regard.”

Hall of Fame team owner Childress said that the “addition of Kyle Busch to the Richard Childress Racing lineup is significant, not only for our organization, but for the sport as a whole,” in a team release. “Kyle is a proven contender at the highest levels of the sport, and I believe that his experience and dedication to motorsports will elevate our race program across the board. I’ve always admired Kyle’s driving style and his ability to win and race for championships ever since he entered the sport. Who wouldn’t want a proven NASCAR Cup Series champion driving their car?”

Following on the “hold my watch” incident in 2011 when Childress removed a Rolex watch before punching Busch after an incident between Busch and then RCR truck driver Joey Coulter, Childress presented a sort of “signing bonus” to his new driver in the form of a new Rolex watch. “We both have grown a lot over time,” Childress said. “We talked about it, and all that’s history.”

The switch to RCR means that KBM expects to field Chevrolets in the NASCAR Camping World Truck Series after being Toyota’s premier team for years. “Obviously, there was an announcement today with RCR and Kyle Busch and KBM has not been a part of that yet,” Busch said, “although we are still working on that sort of stuff with General Motors and Chevrolet.

Childress described his talks with Busch: “When I was up there with Kyle and we first started talking, and we talked about championships and we talked about winning races, I looked at him in his eye, and I had seen that look in Dale Earnhardt Sr.’s eye that he’s hungry—we’re going to win.

“I’d seen that look before, and watching Kyle, I’ve watched his talent since he started in the Busch (now Xfinity) Series, and just how he handles the car, the car control, the way he drives the car and take-no-prisoners attitude, that’s the Dale Earnhardt style I was accustomed to racing with, and I think Kyle has that modern-day style of racing that Dale Earnhardt had in his time.”

Joe Gibbs commented that “Kyle has been a major part of our history and success here at Joe Gibbs Racing. We are thankful for all his contributions to our organization over the years. When you look at all that he has accomplished already, it is truly remarkable, and we know someday we will be celebrating his Hall of Fame induction. We also know he still has many more achievements in our sport ahead of him including competing for the championship this season. We wish Kyle, Samantha, Brexton, and Lennix the very best.”

David Wilson, President, TRD U.S.A. stated in a press release that: “Toyota and TRD are privileged to have raced with Kyle Busch, one of the greatest drivers in NASCAR history.  While we certainly wish Kyle the best of luck in the future and congratulate him on his announcement to join Richard Childress Racing, we’re disappointed and saddened that his future won’t continue to be with Team Toyota. Kyle has been an ambassador for Toyota since joining the program in 2008. He’s gone on to accumulate some of the most prestigious milestones possible for the Toyota brand, including our first Cup Series win for the Camry and first Cup Series championship. He will undoubtedly hold the record for the most wins in a Toyota across all three Championship Series for decades to come.  But more than that, Kyle has been a friend, part of our family and has played a key role in the development of many of our drivers through his ownership of Kyle Busch Motorsports. We wish nothing but the best for Kyle and his entire family as he moves into the next chapter of his Hall of Fame career. We’re thankful to have been along for the ride.”