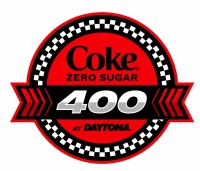 Rain postpones Cup Series regular-season finale at Daytona until Sunday
(DAYTONA BEACH, FL – AUG 27, 2022 – RIS) — The NASCAR Cup Series Coke Zero Sugar 400 has been rescheduled for a 10 a.m. start Sunday morning due to continued storms and rain on the speedway. The race is going to be aired on CNBC, Peacock, the NBC Sports App, MRN and SiriusXM NASCAR Radio.

The NASCAR garage was not opened as scheduled Saturday, thanks to lightning and storms in the area with the near-constant late-afternoon storms and lightning kept lingering and pushed the scheduled 7:46 p.m. ET green flag time at the 2.5-mile Florida track to the next day.

Hendrick Motorsports teammates Kyle Larson and Chase Elliott will lead the field from the front row of the 37-car field after Friday’s qualifying session was also a rainout, and the field was set according to the performance metrics formula NASCAR uses, with Larson and Elliott ranked 1-2 in the.

The 400-miler is the 26th race this season, and the final event that will determine the 16 drivers eligible for the NASCAR Cup Series Playoffs. Fourteen drivers have already locked positions with wins, and two final slots are available.

The postseason begins with the Cook Out Southern 500 from Darlington Raceway next Sunday, starting at 6 p.m. ET, USA, NBC Sports App, MRN, SiriusXM).