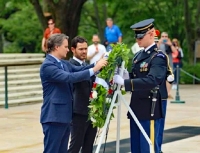 Defending Coca-Cola 600 champion, Kyle Larson, and NASCAR Hall of Famer Jeff Gordon laid a wreath at The Tomb of the Unknown Soldier at Arlington National Cemetery as part of Charlotte Motor Speedway's Mission 600. The event was a prelude to the 63rd running of the Coca-Cola 600 on Memorial Day Weekend. (CMS/Jonathan Coleman photo)

ARLINGTON, VA (May 4, 2022) – Wednesday, as a prelude to its Memorial Day Weekend salute to the U.S. Armed Forces, Charlotte Motor Speedway hosted defending Coca-Cola 600 winner Kyle Larson and NASCAR Hall of Famer Jeff Gordon for a poignant visit to Arlington National Cemetery where the Hendrick Motorsports representatives laid a wreath at The Tomb of the Unknown Soldier. Arlington National Cemetery is the final resting place for approximately 400,000 individuals, including servicemen and women from every major United States conflict since the American Revolution.

In addition to the wreath-laying, the group enjoyed a private viewing of artifacts that paint the rich history of Arlington National Cemetery in the Memorial Amphitheater Display Room and watched a changing-of-the-guard ceremony. At the iconic tomb, which marked its centennial anniversary in 2021, members of the 3rdU.S. Infantry Regiment known as The Old Guard, stand watch 24 hours a day, a tradition that began in 1948.

“One of the honors of winning the Coca-Cola 600 is getting to come to Arlington National Cemetery and (Washington) D.C.,” said Larson. “I’ve never been here before. Seeing the ceremony for The Tomb of the Unknown Soldier was truly special – a huge honor. There is so much prestige with the 600. Then having a tradition like this just adds on to that.

“I’m proud to be here today, proud to pay my respects and get to feel the sense of honor here. As I get to come here and experience these things, it gives you even more of an appreciation for the men and women who have sacrificed their lives and are currently serving. Being here today, getting to shake the hands of so many people was special. I look forward to the 600 even more. I’m excited to get back there again. Hopefully I can win again and make another trip.”

“Tradition is obviously a big part of NASCAR, a big part of the Coca-Cola 600, being on Memorial Day Weekend,” said Gordon. “I love that Charlotte Motor Speedway and NASCAR are coming together to bring the past champion of this event here to Arlington. Seeing the changing of the guard, laying that wreath on The Tomb of the Unknown Soldier, it really speaks volumes and connects what the 600 means to families out there who have lost a loved one in battle and those who are currently serving. I wish that they had done this when I was still driving. This is something that I’m sure is going to become a tradition for a very long time.”

Each Memorial Day Weekend, Charlotte Motor Speedway pays tribute to those men and women who paid the ultimate sacrifice during a moving Coca-Cola 600 pre-race show that includes representation from all five branches of the military.

“It’s such a special opportunity to be back in Arlington as part of Mission 600, and this year to have Kyle and Jeff to celebrate by laying a wreath at The Tomb of the Unknown Soldier,” said Smith. “The whole program for Mission 600 is really an opportunity to celebrate our troops, to celebrate every part of the Armed Forces and to take a special moment to celebrate those who made the ultimate sacrifice. With NASCAR’s entire NASCAR Salutes program, the Coca-Cola 600 at Charlotte Motor Speedway serve as the crowning moment to celebrate NASCAR Nation’s love of our military. All the work that goes into it, the coordination with The Pentagon, with Fort Bragg, with all the different groups that come in to help us, it’s such a special thing for us.”

In recent years, the speedway’s salute has expanded to include Mission 600, a campaign pairing NASCAR drivers with military bases designed to educate the NASCAR community about the day-to-day lives of the men and women who serve in the U.S. Armed Forces. To date in 2022 on behalf of the Coca-Cola Racing Family of Drivers, Denny Hamlin virtually met members of U.S. Army Central, Kuwait; and Daniel Suarez visited Coast Guard Station Wrightsville Beach for a first-hand look at training exercises on the water. Additional Mission 600 visits in the coming weeks leading up to the May 29 Coca-Cola 600 will include Coca-Cola Racing Family and other drivers visiting units from the U.S. Army (at Fort Bragg), the U.S. Marine Corps (at Camp Lejeune) and the U.S. Air Force (virtually with a unit at Camp Ali Al Salem, Kuwait).

TICKETS:
Coca-Cola 600 weekend tickets, camping and upgrades are available at www.charlottemotorspeedway.comor by calling the ticket office at 1-800-455-FANS (3267). Admission to Circle K Speed Street concerts by Flo-Rida (Friday) and The Steve Miller Band (Saturday) is free with any race ticket. Sunday’s Lynyrd Skynyrd pre-race concert is free with purchase of a Coca-Cola 600 race ticket.