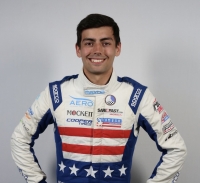 Marotti Autosport is expanding its partnership with Legacy Autosport by bringing back Simon Sikes and adding Andre Castro for the USF 2000 opener at Barber Motorsport Park in the Road to Indy Series. Marotti and Legacy launched their partnership in 2020.

Sikes won the 2020 FRP F1600 Championship, was an SCCA Runoff Champion, and was recognized for his accomplishments with the highly coveted Team USA Scholarship. Castro has had previous experience in USF2000 and performed well in the NASCAR Whelen Euro Series.

"I am thrilled to be returning to the USF2000 Championship Presented by Cooper Tires with Marotti Autosport/Legacy Autosport,” said Sikes. “I am ready to go for the season opener at Barber Motorsports Park, and I am confident in both the team’s and my abilities to perform strongly this weekend!”

"The last time I raced In USF2000 was at Barber, so making my comeback at the same track seems very fitting,” said Castro. “My goal is to keep the car clean and become more comfortable throughout the weekend.”

“All the pieces for a great team and terrific season are coming together,” said Will Marotti, owner of Marotti Autosport. "We anticipate a major sponsorship announcement soon."

Legacy Autosport is a Meyer family racing team whose grandfather and great grandfather was Louis Meyer, the first three-time winner of the Indianapolis 500. The legacy Louis Meyer launched has continued through his son, grandson, and great-grandsons. All have collectively written their chapters in the winning ways of the family. For more information on the team, visit http://www.legacyautosport.com/.

The Road to Indy Series will showcase all three of its racing series – Indy Lights, Indy Pro 2000, and USF 2000 at Barber Motorsports Park this weekend.