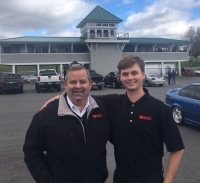 Pastor Will Marotti and Jason Reichert

Pegasus Marketing President, Ralph Hansen is pleased to announce that Marotti Racing has signed 2018 SCCA Runoffs Champion and Pacific F2000 Champion Jason Reichert as a driver for their USF2000 program in 2019.

Marotti Racing has participated in the 2016 and 2017 Indianapolis 500 with Schmidt-Peterson Motorsports, as well as three other IndyCar races also with SPM. In 2016, Will Marotti became the first active pastor to help lead a team to the 500 (source Donald Davidson). The team continues to work with an IndyCar team (not yet announced) and sponsors to participate in the 2019 Indy 500.

Jason Reichert has been racing since he was the age of nine and has amassed thirteen Championships in karting and open-wheel racing, most recently the 2018 SCCA National Championship Runoffs and the 2018 Pacific F2000 Championship. Past awards include the Pacific F2000 Rookie of the Year, Ed Orgeron Trophy for Driver of the Year, Future Star, Sportsman of the Year, and the President’s Award. Will Marotti said, “We could not be more thrilled to have a driver the caliber of Jason to be our first signing! He is smart, fast, personable and extremely mature. He will be an excellent brand ambassador for any sponsor. We have absolute confidence that Jason will win races and championships in the years to come.”

Jason Reichert said, “My goal has always been to be an IndyCar driver and win the Indy 500. Signing with Pastor Will Marotti and Marotti Racing is a true blessing! The team’s goal is to move up the IndyCar ladder system so I look forward to working hard and eventually competing in “The Greatest Spectacle in Racing”, driving the Marotti Racing entry!”

In addition to Reichert, long time race team owner and driver development coach Dave Freitas (DaveFreitasRacing.com) with be providing engineering support and driver coaching. Dave began as a mechanic in 1987 for an open wheel team in Southern California and opened his own shop four years later. Freitas has also driven many different types of cars in several series across the US. Marotti Racing welcomes another consummate professional to the team.