Future of the Automobile Conference 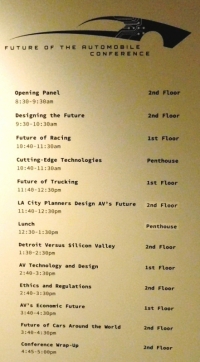 May 3rd, 2018 marked the inaugural 'Future of the Automobile Conference' sponsored by The Petersen Automotive Museum and The Los Angeles World Affairs Council held at the world renown museum. The Petersen staff and the LAWAC did an incredible job of both gathering and presenting these manufacturers, urban planners, regulatory agencies, and technological authorities. [Please see http://www.futureoftheautomobile.org for Agenda, Speakers, Contact, etc.]

As you probably already knew, Los Angeles has long been the center of 'car culture' and the world is monitoring this epicenter for how the urban landscape will evolve with the coming of electric, autonomous, ridesharing vehicles both cars and trucks. California will invariably play a pivotal role in how these technologies play nice with its – inhabitants.

The day started with check in at 7:30am and complimentary coffee and bagels and the book "Switching Gears" by Dan Eberhart of Canary. First session of 11 was the Opening Panel: Perspectives on the Future of the Automobile after some opening words by both Peter Mullin, Chairman of the Board of Directors for the Petersen and Chairman of the MullinMuseum, and Terry L. Karges, Executive Director of the Petersen. There was a lot of talk about how disruptive the new technologies of autonomous and electric propulsion will be over the next 30 years. Will people still continue to own cars? Major companies may own them and people will 'hail' them as needed. Will there be a significant loss of jobs like valets, long haul truckers, cabbies, etc. Cost of transportation will dominate; owning a vehicle may make no sense.

"Some cities may totally disallow gas powered vehicles," hinted Dakota Semler from Thor Trucks. Some companies are going to be in business for the 'last mile' to deliver your online bought products. "There will be smart vehicles for a smart world," said Brian Witten of Symantec. "You have to also be digitally secure to be – safe," Brian added. John Rossant from NewCities and LA CoMotion said, "It is going to be a bumpy ride. One third of our electricity comes from coal powered plants. This will improve with age." All of this Opening Panel session was moderated by Terry McCarthy, President and CEO of LAWAC.

There was a lot of postulating about the future but no one has a crystal ball.

Jay Ward, Creative Director of PIXAR, and Franz Von Holzhausen, Chief Designer at Tesla, had an 'animated' conversation about the future of car design and even 'CAR' movies during their session entitled – "Designing the Future." Jay had the audience laughing when he noted that the cars in CARS, the movie, were the first autonomous vehicles (AV).

There were several time slots that had two sessions and thus it was not able to attend all. I attended the "Future of Racing" over "Cutting Edge Technologies." Rod Chong, executive with Roborace gave his wild and provocative views on fan interaction for the future while Terry Karges tempered some of those views from his many years in NASCAR and MotoGP. We all are hearing how the younger crowd/generation will have a different view on cars as the future evolves. Rod is all about bringing in the fan and letting Roborace be a place for OEMs to fail. Terry was unsure what the final answer will be regarding racing and audience participation, per se.

"The Future of Trucking; The First Frontier" was chosen over "LA City Planners Design AV's Future." AV being Autonomous Vehicles with Terry McCarthy moderating the trucking session. I understand the city planners are thinking on how to plan an infrastructure prior to the 2028 Olympics. Paul Rosa, SVP of Penske Trucking, was present along with Doug Bloch, Teamsters Joint Council 7 and Dakota Semler, Thor Trucks. Penske Trucking has 270,000 trucks on the road of which 80,000 are tractor trailers. Will they have jobs down the AV road? Doug has 600,000 members of which 250,000 are with UPS Trucking alone. Doug ensures that his members find any technology advances are safer and easier for his thousands of drivers and feels that long haul trucking will be the first to automate. Doug stated how trash and ready mix concrete trucks are the most dangerous.

Hub and spoke will still be around for a long time. Big question was why did Warren Buffet buy up all the trucking stops? What did he foresee? Moving product will increase. Doug stated, "Four million drivers could potentially lose their jobs. Let's get on this before having to create a new welfare program." Dakota commented that the majority of the electric truck will be within 300 miles of any hub. Mr. Rosa alluded to why OEMs take their time getting trucking products to market due to testing duty cycles ensuring their products are safe and reliable. It came out that 40% of truckers prefer manual transmissions.

Lunch was enjoyed and conversation abounded. I then attended "Detroit Versus Silicon Valley: Who Prevails and When?" Paul Lienert from Reuters moderated the session with Russell Hensley, Rachel Nguyen and Alex Roy. Alex represents the Human Driving Association is smartly positioned to oppose some of the advancing autonomous technology. It was a very entertaining session. Alex admits that he is not a transportation expert but does not see flying taxis in many decades. Rachel sees 'pods' for the 'first and last' routes idea. It was noted by all that it will be another 25 years before today's cars go away. Alex does not feel there is no more need for more connectivity. Alex said, "Autonomous is so ambiguous. Lane keeping is autonomous? Safety will be mandated like seatbelts and zero distracted driving." Rachel felt that technology will bring options. If it meant for her to enjoy her kids more as she takes them to school with an AV versus driving or doing work on the drive to work thus potentially having a shorter day – so be it. Bring it on.

All seemed to agree that everyone may own a single vehicle versus 100% ridesharing due to an emergency like a hurricane. Surge pricing may be obviated if you own that single vehicle to be used as an escape hatch. Russell stated that ridesharing only represents 1% of the population. And, those in the rural parts of the country will have their vehicles as well.

Next, I attended "AV Technology and Design" over "Ethics and Regulations: Who's at the Wheel?" John Hotchkis, Jr. from Hotchkis Performance moderated Stewart Reed from ArtCenter, Jason Wilbur from Brave Motors and Mounia Ziat from NorthMichiganUniversity. Mounia studies and researches how human interact with the machine, car and/or airplane. "Haptics" was the new word bandied about. Haptics is the connection to reality via touch. How do we design cars for humans? Stewart commented that ArtCenter's students come from all over the world. Some students come to the school and get it and some come to the school and are blank sheets; they never really were very involved with automobiles. Jason graduated and on his 20 mile trek to Torrance from Pasadena he was sitting still in traffic. Uh? This is what I graduated with a transportation design degree? The system was the problem, not the product. This turned his design thinking upside down.

Mounia stated there are no safe driver systems; only an attentive driver is the best. Need the human to understand the car and the car to understand the human. She gave the example of the 'horse haptic.' Imagine, one can basically let go of the reigns of a horse while riding it as the horse will not run into trees and will jump over obstacles, per se. You, the rider, will feel the horses muscles and just know all is well. Now sit in a car moving at 60 mph. You have zero sensation anything is going – wrong. So, the driver will have to have 'feel' from the automobile. I know of a vest used in aircraft that will vibrate in the direction 'UP' is. THAT is what we are trying to devise. John Hotchkis, Jr. stated how we all like control. Mounia stated that 50% of people will get motion sickness while reading in a moving vehicle. I stated how my friend is a corporate pilot, into race cars and has to sit in the front seat of the car or he will get motion sickness. Uh? Really? Mounia discussed augmented reality using a heads up display (HUD). It was found that it took 10 - 17 seconds to get back to 'reality.' That means one has to read all available HUD info and then they would be as alert as if they were driving the vehicle 100% of the time.

Stewart reminded us that Franz Von Holzhausen liked his designs to 'quiet things down' to take in the outside world better or have better situational awareness.

The last session was "From Beijing to Dubai and London to LA: The Future of Cars Around the World." "Challenges and Opportunities: AV's Economic Future" was in another part of the museum. John Rossant moderated the 'worldly' session. Erik Antonsson of aiPod stated how other parts of the world are very open to and are use to automation. Michael Dunne of Dunne Automotive said there are 140 Chinese automotive manufacturers over there. "The US has no idea what is coming," said a US OEM executive when accompanying Dunne to a previous China Auto Show. China purchases 90 million cars. US – 30 million. China buys more than 200% more vehicles than the US. Of the cars bought, only 2% are imported and high end like Rolls Royce and Lamborghini and such. They have the largest ridesharing market. They want to eliminate smog by becoming a leader in electric vehicles. NEO in San Jose, California employ 500 people and are 100% Chinese based. The future will be exciting.

The event ended with a nice reception on the roof/penthouse area with incredible views aside from the beverages and finger food. All in all, I cannot, unfortunately, summarize all the insightful and priceless information that was conveyed today. I, as should you, look forward to next year's. I am working on a crystal ball to help out the vehicle evolution…

I am a journalist/photographer/member of AARWBA and a member with the Motor Press Guild both since 1990. I am an aerodynamicist with 28 years of aircraft design and flight test experience besides consulting on vehicle cle aerorodynamics having spoken at over 35 universities. I am an FAA certificated commercial pilot with multi-engine and instrument ratings who recently got FAA endorsed as second in command (SIC) in the Gulfstream G-IV corporate jet. President/Founder of Vehicle Aerodynamics Consultants, Inc. whodd site can be found at Aeroseminars.com where I consult on a variety of vehicle aerodynamics projects from radio controlled vehicles like TRAXXAS’ XO-1, bicycles, world land speed record vehicles, Mach 3 target drones, motor vehicle stunts or the automotive industry's OEM Tier 1 suppliers besides designing and flight testing for various aircraft corporations.