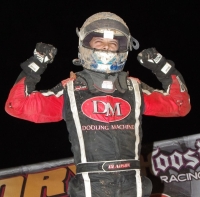 Clauson's win came a week after he won the the Oval Nationals at Perris, California.

Veteran driver Dave Darland started on the outside front row of the feature and took the lead from Tracy Hines on the second lap while Ballou took second from pole starter Hines on lap three but the pass was called back because of a caution flag the same lap.

After the uninjured Faria and his car were cleared from the track and everyone was pushed off Darland continued to lead while Clauson moved up to challenge Bacon for third, which he took on lap eight. A lap later Ballou took the lead from Darland to become the third leader.

The race continued without incident as Darland and Clauson fought for second place. By lap 15 Clauson was in control of second and the leader was in his sights. Lapped traffic was slowing Ballou as he passed the first back marker on lap 16. Taking advantage of traffic Clauson took the lead on lap 19 but Ballou fought back and reclaimed the lead three laps later. Finally Clauson took the lead for the final time on lap 24. Ballou was not giving up and continued to nip at Clauson's heels. The track seemed to be changing to favor the lower line in the turns and Clauson seemed better on the 'bottom' then Ballou. Ballou got close on lap 27 but was not able to make a serious attempt to pass.

Back in the pack Brady Bacon made a late race pass of Darland to finish third.

The win for Clauson was his second in only seven starts this season. "It was a lot of fun to race like that. I thought once he got out front, it would be tough to do anything, but as the top got a bigger ledge and we got into traffic, our car being so maneuverable helped get us into the battle. We cleared him at one point and he got back around us, and we were just battling for every inch, and I think he biked up there and I was able to get away. Towards the end, I was just trying to do things different and not give him a clean look, and keep lapped cars in the way so he couldn't do much with us. You've got to be smart and not make mistakes if you want to beat a guy like him. My car owners Joe Dooling and Brodie Hayward obviously did a great job putting this together, and I have to thank my dad (Tim) and Tyler Ransbottom for all their work, and Mike Martin for loaning us this engine we've used the past four races," Clauson said.

Robert Ballou was not happy with second. It was only the third time this year when he lead a race but did not go on to win. Having the National Sprint Car title helped him get over the dissapointment. "It's really been an unbelievable ride. I never would have thought we could have accomplished what we have. Obviously, it's frustrating to be so close to that fourteenth win (to tie the all-time single-season record set by Tom Bigelow), but we just got beat by an incredible race car driver in Bryan Clauson. This year has been something that's come from years of work and struggle. I'm really proud of Derrick Bye and myself for getting our program to this point, and I again have to thank all the people who have helped in any way to get us here," said Ballou.

A 360 USAC Southwest & West Coast Sprint Car feature came before the National Series event and was won in impressive style by Californian Brody Roa who held off Brady Bacon and Justin Grant to win Wire-to-wire.