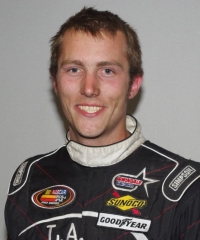 IRWINDALE, CA -RIS- It was “The Night of Champions” on the final night of stock car competition of 2014 at Irwindale. In the top class, the Super Late Models the racing was as close as it could be during the fifty lap event with Jason Patison leading most of the way. Patison started the race in a tie with Tony McCray for the season title but his main rivals were third place Linny White and fourth place Jack Madrid. Patison took the lead when White went off line on the first lap and held it. White and Madrid kept at his heels the whole time.

As the race moved to it finish White turned up the heat and finally on lap 45 White got around him for the first time but Jason was not through. On lap 47 he took back the lead by a fender and stayed there until the 49th lap when he slid up the banking coming out of turn two and let Lenny White out into the lead a second time. Patison was not done yet as he went after White and gave everyone a last thrill as he went under him in turn four and raced to the line. He was beside White at the finish but .035 of a second late. He had been sliding so much out of the fourth turn that as he came across the line his car swapped ends and he spun towards the infield, narrowly missing the impact attenuator on the end of the first turn wall.

All this just made the victory that much sweeter for Lenny White as he became the season track champion in the division while winning in the Super Late Models for the first time!

Jack Madrid came in third while Tony McCray had a quite night as he rolled home fifth which also gave him third place in the season points ahead of Madrid.

It was another great show for Irwindale Race Trucks as Ryan Partridge came into this final race with a 40 point lead after having claimed the Late Model title two week ago. With 100 points up for grabs he still had to race for it and Christian McGhee and Joey Licata Jr. were not about to make it easy.

The start had Partridge starting fourth behind Ken Michaelian and Lucas McNeil. Joey Licata and Christian McGhee were a row back in fifth and sixth. Following an early scramble Partridge ended up in front with Licata and McGhee close behind. On lap 36 Andrew Porter spun in turn two and brought out the caution flag with Licata leading and Partridge second. After the restart McGhee took second place and Partridge setteled into third. They ran that way until lap 47 when Ken Michaelian was the loser on a fight for the line through turn three and hit the wall hard.

On the restart McGhee got the jump on Licata and took the lead on lap 48. But Licata was back on lap 49 and won the race by about .3 seconds.

Third place was plenty for Partridge who took his second Irwindale championship of the year.

Bakersfield's Blane Perkins took the Spears S2 series race with an 1.2 second win over John Butler. This was Perkins third victory in a row at Irwindale and fourth in a row in the touriing S2 series driving the Tim Huddleston number 50.

La Verne's Aubree Porter won her first race in the Mini Stock, making up for a last lap spin earlier iin the season that cost her a win.