An Emotional Night At Perris 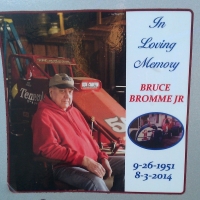 PERRIS, CA AUG 16, 2014 -RIS- It was billed as "California Racers Hall of Fame Night" but it became tribute night to Bruce Bromme Jr. due to his August third passing. A long time crew chief and the son and grandson of legendary racers, Bruce's cars had won many CRA and SCRA championships. The most recent drivers for the team, Michael Spencer and Damion Gardner were both dedicated to racing in his honor. Richard Griffin was also there in his memory.

Qualifying went Michael Spencer's way as he set fast time at 16.512. The first heat was not as good for the driver of the Bromme #50 as Brody Roa out ran him. Jake Swanson won the second heat in the “Moosemobile” while Damion Gardner ran away Nic Faas to win the third heat.

Several cars were missing as Cody Swanson flipped in the heats and Greg Alexander lost his engine in hot laps. Other interesting changes in the cockpit were the return of Garrett Hansen as he replaced Cory Kruseman in the yellow Priestley number seven and Ronnie Gardner driving the nine car which is still marked with Rickie Gaunt's “Super Rickie” logo. Some tape turned the nine into the 93 for the record. Lastly Kevin Thomas jr. was visiting from the Midwest driving the 73x of Josh Ford Racing.

The 30 Lap feature was started with the Josh Ford cars of Nick Faas and Kevin Thomas Jr. on the front row. Faas went from the pole to lead lap one and then was third place starter Austin Williams. Williams lead the next 12 laps while Faas had jumped the cushion and fallen back to fifth. Kevin Thomas Jr. was having a good fight with Damion Gardner for second with Gardner running the cushion while Thomas was running at the bottom of the turns.

A caution for a spin by Jon Kairot may have been the first sign of how the track was getting slick and dry. It set up a big move by Gardner on the lap 14 restart. Gardner had just passed Thomas to take second on the lap before the yellow. On the restart Gardner passed Austin Williams out of turn two to claim the lead. As soon as he was in the clear he was running away.

Back a few places the emotional favorite of the event, Michael Spencer in Bromme's red number 50 was struggling in fifth place. Fighting to take fourth place from Matt Mitchell on lap 18, Spencer tried too hard in turn two and slid into the wall at the turn exit. Hitting the right rear hard into the wall he spun back into the racing line where Brody Roa made contact. Roa stopped against the straight wall and the yellow came out. Before everyone was slowed down there was a second hit into Spencer's car by David Bezio who flipped and brought the race to a halt.

After the race restarted Nic Faas proved that Spencer was not the only one having trouble in turn two as he slapped the wall on lap 20, ending his race.

On lap 20 Austin Williams took second from Thomas but Thomas took it back on lap 22.

The big crash of the night came on lap 22 in turn three when Cody Williams flipped. Logan Williams, Jeremy Ellertson and A. J. Bender were also involved.

Logan Williams restarted but three laps later he was the cause of the final caution of the race as he went into the wall exiting turn two.

The final seven laps were run without incident as Gardner appeared fully in control.

In the winner's circle Damion was very determined to show all the legend on his helmet “In Memory of Bruce Bromme RIP Homie”. Even after Damion stopped driving for Bromme he continued to consider him one of his best friends and a trusted advisor.

Next USAC/CRA race is the "Louie Vermeil Classic" way up north in Calistoga for two nights August 30 and 31st.