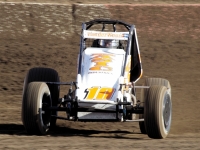 Vander Weerd In hot laps before the race. photo Speedblur101

PERRIS, CA May 3, 2014 -RIS- It was a night to remember at the 'PAS' as Damion Gardner's winning streak came to an end and Richard Vander Weerd became the newest winner in theAMSOIL USAC/CRA SPRINT CAR Series. Gardner came in third but was moved to second as Nic Faas was moved back two places for jumping a restart late in the race. Gardner came from the back of the field and had moved up seven places in the last eight laps as he fought to keep his streak intact.

The race started with an all Williams front row as Cody took the pole and Austin occupied the outside front row. Vander Weerd had position three and Jake Swanson was in fourth. Michael Spencer was in fifth position while Nic Faas started in the six spot.

This begs the question “Where was Damion.”

Damion Gardner had drawn the first qualifying position and, for what ever reason did not make it out at his correct time. When he did go out after all the others he had one lap to set his time and that was all he needed as he was the fast qualifier at 16.693 seconds. USCA then invoked a rule which said that he could not start further up in the field than half way. This left Damion starting 12th after winning his heat. 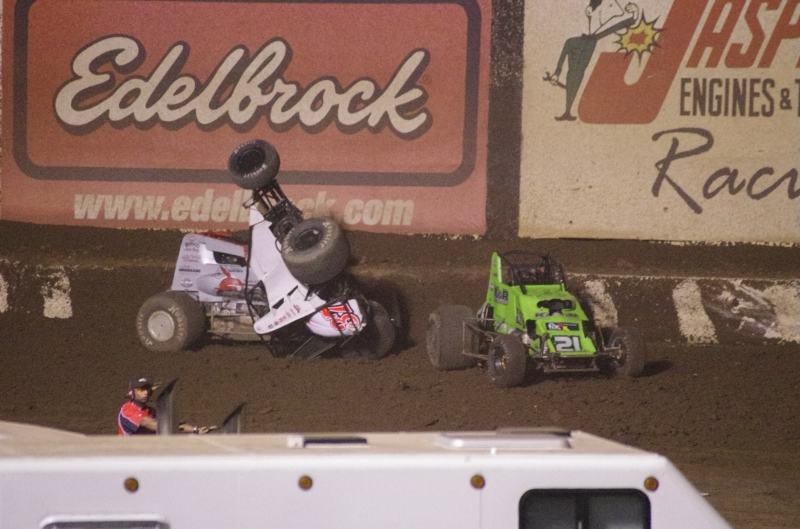 Starting back in the field is a scary thing as accidents happen and so it was with Damion. AJ Bender and Matt Mitchell were in front of Gardner on lap four when they crossed wheels going into turn four. Mitchell flipped and came down on Gardner as he was passing on the outside of turn three. The race was halted as Mitchell's car was removed from the top of Gardner's. All those involved were able to restart but Gardner got the worst of it with a bent frame as well as a badly bent back bumper.

Up in front the Williams brothers were in the top spots with Cody in the lead until Austin took over on lap five. With 27 laps remaining Damion Gardner was restarting 19th in a bent car. On the restart it appeared that Spencer was in trouble as he jumped the turn two cushion and fell to fifth. Vander Weerd moved to third and went to work on to Cody Williams.

Austin Williams was in control in the lead and looked confident. Vander Weerd had passed Austin Williams for second on lap 19. Gardner was stuck behind Greg Alexander in ninth place as the race entered it's final ten laps. Then Austin jumped the cushion in turn four and hit the wall. He bent his front axle and that ended his race.

Twenty one laps done and Richard Vander Weerd was the new leader.

Cody Williams was not making any serious challenge from second as Cory Kruseman passed him. On lap 24 Kruseman got out of shape in turn two and slowed which caused Cody to bump him and put both drivers back about four positions. Nic Faas had moved to second with Greg Alexander third and Damion Gardner in fourth.

On lap 27 Gardner finally got around Alexander for third . Alexander and Gardner had been running together for for almost ten laps and the longer they were together the faster Greg looked.

The top three drivers were too spaced out for any challenge in the final three laps and the caution flag that could have closed the field up for some last lap heroics stayed in the flag mans hand. As soon as the race was over the decision to take two positions from Faas came down and Gardner and Alexander were advanced to second and third places. 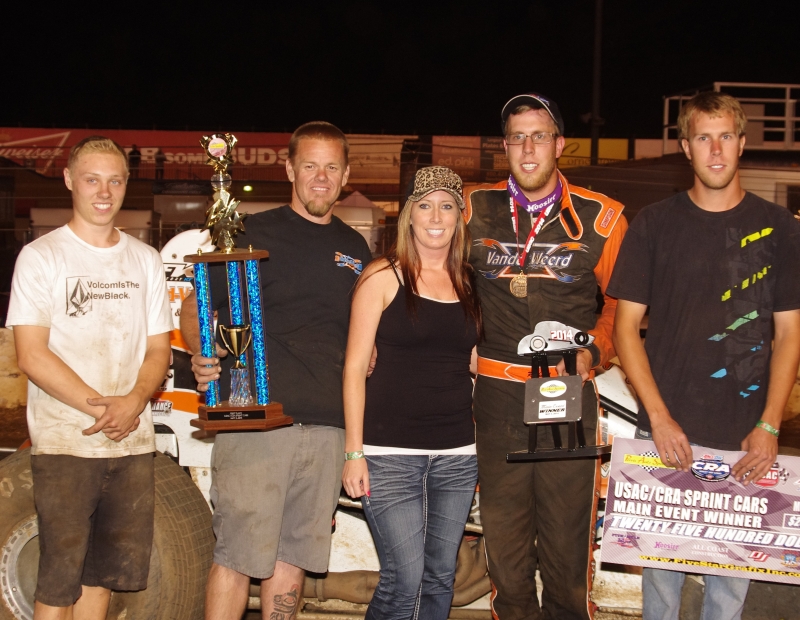 Everyone at the podium was happy although Gardner was not as happy as he could have been. Richard Vander Weerd had worked his way to the front after many seasons as an also ran. Damion Gardner had delivered one of his best efforts on the way to second and Greg Alexander acted as if he had won by running third in a unique chassis by RaceCrafters (SN 001) which he was very happy about.

The heat races were won by AJ Bender, Mike Spencer and Cory Kruseman as well as the previously mentioned Gardner win. The B main went to Logan Williams, the youngest of the three Williams boys. Thirty cars were at the track for the e