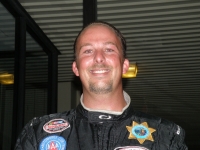 IRWINDALE, CA APRIL 19, 2014 -RIS- Twin 30 lap featuers by the Lucas Oil Late Models were the top of the bill for Irwindale Speedway. It was something familiar and something new in the winners circle as Ryan Partridge took his third race in a row and then Travis Irving took the second race.

In addition to the Lucas Oil Late Models there were features for the Spears S2, Bandos, Legends, South West Tour Trucks and Super Stocks as well as a trailer race for the entertainment of the 3823 fans on hand.

The Bandos kicked off the night with a victory for Ryan Vargas who came from the pole for the 20 lap win.

The Spears S2 cars were next out where Trevor Huddleston, son of Tim Huddleston won the 30 lap feature after starting fifth.

The Legends had 35 laps on the quarter mile track for one of the most entertaining races of the evening as Brent Scheidemantle came from sixth starting position to win.

The South West Tour Trucks had eleven trucks and Zack Green came out on top as he went from fourth to first in the 27 lap race. Ronnie Davis Jr. lead the first nine laps before Green took over.

The Super Stock class was contested by ten cars with Zack Green winning a second race in a night and in a row. Green started sixth and took the lead from Craig Rayburn on the sixth lap. On lap eight Greg Crutcher blew an engine and came to a stop in turn three where a small fire burned for a time. The race was stopped so the fire crews could work. Because of this delay the race was trimmed from 35 to 30 laps. As the race was ending Gary Read was closing on Green and looked to have had a chance had the race not have been shortened.

The second Lucas Oil Late Models second feature Travis Irving went from the pole position to lead all laps and win. Irving had not driven in the class much lately and was only called about driving on 9:30 PM Wednesday and then testing on Thursday before racing Saturday. Ryan Partridge and Cole Custer were fighting over second place for most of the distance with Custer taking second place on lap 27. Irving won by 1.390 seconds in a race that was caution free.

Finally there was a ten car trailer race for the enjoyment of the fans and it was the first win for Tommy Mason who won on acclimation of the fans.