2014 Starts With Hat Trick For Gardner 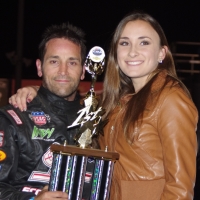 Damion Gardner with his third feature win this year.

PERRIS, CA APRIL 12, 2014 -RIS- Damion Gardner has started the 2014 USAC/CRA season with a hat-trick as he held off fast qualifier Michael Spencer to win for the third time. Starting from fifth position Damion moved past early leader Matt Mitchell to take the lead on the fourth lap. He lead the 27 remaining laps despite determined challenges from Spencer who started sixth.

The race started badly for Cal Smith as his car spun on the initial start and also on the second lap drawing the first two caution periods of the night. Matt Mitchell came from third to pass Brody Roa and Gary Taylor to lead the first three laps but Gardner was moving up quickly and was on second by lap three and took the lead in turn on of lap four. He ran away to an easy lead while Spencer carefully picked his way through the top six. Spencer was still in fourth when a second caution flew for Cory Ballard and David Bezio who came to a stop against the turn three wall on lap eight. After the restart Michael passed Taylor for third on lap 10 and then took second from Mitchell a lap later.

As the mid-point of the race approached the leader, Gardner was catching traffic and this gave Spencer a chance to close with the leader. On lap 18 Spencer was close enough to bump Gardner and they were side by side on lap 20. An unofficial lead change came in turn four on lap 21 when a back marker made Gardner slow and Spencer went low to make the pass. Unfortunately the new leader jumped the cushion exiting turn four and both Gardner and the lapped car got back around him. The failed 'pass' left Spencer fighting to hold on to second while Matt Mitchell closed from third.

Lap 23 brought the race to a halt as Cody Williams flipped in turn three. Cody was out and OK it appeared and the race was resumed without too great a delay though Seth Wilson could not make the green and was pushed off the track. At the green flag Gardner continued the lead and made it look effortless. That only lasted for two laps as the yellow flag was back out for Vern Sweeney who spun on turn two. The race was green on lap 25 and on lap 26 something happened wrong for Spencer in turn one as he checked up and lost almost a straight to the leader who cruised home with no real issues.

Damion fell 43 thousandths of a second short of a total sweep as that was the amount of time Spencer beat him by in qualifying. Michael had fast time with a 16.307 second lap verses Gardner's 16.350 second effort. There were only three heat races and A. J. Bender and Cory Kruseman joined Damion Gardner as heat victors.. The B main was won by Ronnie Gardner who beat Austin Williams and Cody Swanson. In the B main the most serious wreck of the evening happened as Chris Gansen flipped hard in turn three. The front end of his car was heavily damaged and the front axle and a wheel were caught high in the turn four catch fence where they remained for the rest of the evening. Perris has good and exceptionally high fencing and it proved it worth this night.

A 15 lap senior sprintcar race was run and won by Bruce Douglass.

The World of Outlaws was also at the “PAS” on a most unusual sprintcar double feature which was won by Joey Saldana and is the subject of its own story.

The USAC//CRA series is off until May 3rd when they return to Perris.