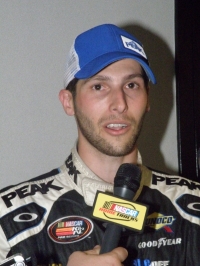 IRWINDALE, CA 03/22/2014 -RIS- Patrick Staropoli of Plantation, Florida driving the PEAK Toyota was the surprise winner of the NAPA 150 at Irwindale Speedway. It was the sixth series start for the 24 year old racer who got the ride by winning the “PEAK Stock Car Dream Challenge” against 800 other drivers. It was his first start at Irwindale Speedway and his first win in the K&N Series.

The NASCAR K&N Pro Series West returned to the half mile at Irwindale for the first time in three years. Twenty six of the best short track drivers arrived from as far as Canada and Florida for the NAPA 150. FOX Sports is here to cover the race which will be broadcast April 4th at noon. Clint Bowyer has made the trip from Fontana to attend and was signing for the fans in the pre-race fan session. Rumor has it that Jeff Gordon, Bill Elliott and a few others are also came to watch.

Patrick started fifth and ran towards the back of the top ten most of the race while Brandon McReynolds and Brett Thompson lead the early laps. Staropoli started to look like a contender following a caution on lap 120 of the 150 lap race as which he was in fourth and moved to second on the restart. There was a further caution for a spun car on lap 129 and on the restart on lap 137 Staropoli took the lead from Ryan Partridge who was was also passed by Greg Pursley for second place. Pursley became involved in a fight for the ‘place’ positions and finished third behind David Mayhew while holding a very slight lead on Brandon McReynolds who came in fourth. The leaders did not pit during the event.

Staropoli is not typical of racers or 24 year olds generally in that he is a medical student. Following the race he was beside himself he said repeatedly “I just can’t believe this!”. “A year ago I was in school full time and working on my own cars out of my garage. One car garage in my house and then I entered this thing called the “PEAK Stock Car Dream Challenge” that Ryan Emerick and everyone at PEAK put together. Michael Waltrip racing. Won that and got a one race deal with Bill MacAnally and since then it’s just been the ride of a lifetime. To even have been here and and win this thing, it blows my mind still.” “I was counting on that last caution. We got up there. We had a great battle for the lead. I hope that was exciting for all the fans. This place was packed tonight.” Said Staropoli

In addition to the K&N cars the Irwindale Super Stocks and the Race Trucks have raced in 30 and 40 lap races. Ryan Partridge took the truck race win while Zack Green won the Super Stock feature.

An important announcement was made between races as it was announced that racing on Irwindale Speedway is set for 2015. Following the 2012 bankruptcy the track as been on a year to year lease and there had been rumors that it might be closed after 2014. With that resolved hopefully the management can chart the venues future with a bit more certainty in both event scheduling and sponsorship.