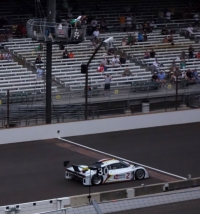 INDIANAPOLIS -RIS- It was a full day at the Indianapolis Motor Speedway. The day started with the NASCAR Nationwide and Sprint Cup teams practicing on the famed 2.5-mile IMS oval for tomorrow’s running of the Indiana 250 and Brickyard 400.

Then the IMS facilities crew got to work and changed-over the oval to the 2.534-mile road course configuration. What had taken 18 days thirteen years ago when Formula 1 was running at Indy now took less than an hour.

In the Rolex series, the #10 DP of Indianapolis-based Wayne Taylor racing launched into the lead in the hands of Jordan Taylor (partnered with Max Angelelli), just ahead of the #01 of Memo Rojas and Scott Pruett.

A Christian Fittipaldi-caused yellow at Turn 4 on Lap 12 brought out the full course caution. The resulting pit stops realigned the running order as #8 (Pierre Kaffer), #90 (Ricky Taylor), and #10 (Jordan Taylor).

At the green flag, the #90 Corvette DP moved past Kaffer’s Starworks BMW/Riley, and into the lead.

The afternoon’s second yellow flew on Lap 28 as the #77 Doran Ford/Dallara, piloted by Doug Peterson, spun in the infield, thus leading to another round of Daytona Prototype pit stops.

This time, the #99 GAINSCO Corvette of Jon Fogarty led the field to the green, with Pruett in the #01 and former Champ Car champion and current IndyCar driver Sebastien Bourdais in third in the #4 Corvette. It was Lap 36.

Pruett took the lead a lap later and held off the hard-charging #99.

Lap 47 saw the third yellow of the day, handing the restart lead back to the #10, again driven by Jordan Taylor.

The last yellow of the event arrived on Lap 56 as the GT Class Corvette of Eric Curran and the Ferrari of Anthony Lazzaro came together in Turn 2, sending Curran into the gravel.

Max Angelelli took the wheel of the #10 from Taylor during the caution pit stops. When the green flag flew for good on Lap 62, the restart order top-3 was the #9 Corvette, the #10 Corvette, the #6 Ford/Riley (NASCAR and IndyCar star AJ Allmendinger driving).
Angelelli snagged the lead into the first turn, Allmendinger in tow.

On Lap 72, with less than an hour remaining, the #2, Dalziel handling driving chores, took the lead from Angelelli. From here, the DP lead was a battle principally between Dalziel in the #2, Pruett in the #01, and Alex Gurney in the #99.

Gurney took the lead on Lap 75, the leaders deciding to pit. Gurney came into the pits on the next lap, handing P1 to the Starworks #8 BMW/Riley, Brendon Hartley driving.

As Hartley pitted three laps later, the #77, Barrichello driving, retook the lead. By Lap 87, Barrichello had better than a 24-second lead on second-place Dalziel in the #2. And the gap was growing, until fuel consumption concerns in the Doran Ford/Dallara caused Barrichello to ease back.

With nine minutes remaining in the three-hour event, Barrichello brought the #77 into the pits for a quick splash of fuel. But the damage was done. Dalziel’s #2 took the lead and never looked back.

Behind Dalziel, Scott Pruett and Alex Gurney engaged in the kind of combat we’ve come to expect from the Sabates/Ganassi and GAINSCO/Bob Stallings teams.

The #2 of Ryan Dalziel and Alex Popow won overall and in the Daytona Prototype class. It was the second consecutive victory for the Starworks with Alex Popow team. Jordan Taylor would be credited with leading the most Daytona Prototype laps with 26. Barrichello led 22, and Dalziel led 12.

There were nine cars that led, driven by 14 drivers, with 15 driver and car lead changes.

It was an auspicious finish for the #01. Both Sabates/Ganassi Rileys were equipped this weekend with brand new, smaller-displacement BMW engines. But with a new engine comes new issues.

“She’s thirsty,” Pruett said after the team’s second-place finish, “but we knew that going in.”

In the GT class, Boris Said led early in the #31 Corvette, but the #57 Stevenson Motorsports Camaro GT.R, Robin Liddell at the wheel, came on hard, and led a typically strong GT field.

When the dust settled, it was Ferrari over Corvette, Camaro, Porsche, and Audi. Jeff Segal aced the GT class in the #61 Ferrari 458 of R. Ferri/Aim Motorsport.
In the GX class, it was all Sylvain Tremblay  and the #70 Mazda 6 GX. Tremblay led a class best 47 of the 107 event laps, and his co-driver Tom Long led another 12.

Jim Norman and Spencer Pumpelly were second in the GX class in the #38 Porsche Cayman GX.R.

In GT, John Potter, Andy Lally and Magnus Racing sit atop the chart with 199 points.

Jim Norman is GX points leader with 233, and BGB Motorsports leads the teams with 228.

In the ST Class, Terry Borcheller and Mike LaMarra took victory in the #23 BMW 128i entered by Burton Racing.

The next stop for Grand-Am series is at Road America on August 10th.

Has been a contributor to RIS since 1992. He was invited to join the staff as a full-time reporter/editor in 1995. Tom has reported on IndyCar, Formula 1, NASCAR and the 24 Hours of Le Mans. In addition to his RIS work, Tom has been a contributor for General Motors, Nissan, Toyota and the ACO.