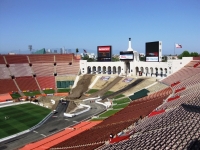 THIS is why stadium series racing is cool...
View Image Gallery

Los Angeles, CA  -RIS - Robby Gordon and the Stadium Super Truck (SST) series have put a ton of effort as well as tons of earth, asphalt, blood and sweat into the Los Angeles Coliseum for the *third race in the series. (* - the demo at the Long Beach Grand Prix a week earlier 'counted' towards points per Robby)

I had a chance to chat with Jon Carlson, Director of Operations for the Stadium Super Trucks organization, and he touted that the business model that Robby Gordon has designed is near-bulletproof. This first year with 11 plus stops on the tour is a time to solidify things such as feeling out the various tracks, err stadiums for overall track fit, demographics and relationships amongst the various stadiums. There are a few stops abroad - international. Awesome. In marketing, you've got to spread the word and do it consistently. If what I am seeing tonight has anything foretelling of the future - Robby has revived what the LA Coliseum hasn't seen for 25 years.

The visibility of the series is increased by the professional coverage of NBC Sports Network. Heck, the stadiums are designed for shooting fish, err, Stadium Super Trucks in a 'barrel.' Besides all of the vantage points around the stadium(s), a quad-copter drone is used to exploit a '3-D' view of all the ever evolving scenes.

Jon and Robby called on all of their contacts over the years to ensure the success of this series. Sonsray Machinery stepped up with CASE machinery to handle all of the heavy earth moving and such. There are CASE dealerships across the U.S. to be there to make sure the tracks are created. Speaking of created, four days ago the SST team moved the first piece of the Coliseum and tonight there is a fabulous course for several levels of competition to take place. The football playing turf is preserved with plastic, plywood, four inches of earth and one and a half inches of asphalt. This and concrete K-rails outlining the course took some effort for sure.

The several classes running are Monsters/Bigfoots, Super 1600s, the Stadium Super Trucks and Modified Super Trophy Karts. See more at http://stadiumsupertrucks.com/ssts/ See the photos attached here and in a separate photoblog(s). Enjoy! I did!!!!!

I am a journalist/member of AARWBA and an affiliate with Motor Press Guild. Oh, by the way, I am an aerodynamicist with 24 years of aircraft design and flight test experience. I am a commercial pilot and have a website aeroseminars.com where I consult on a variety of vehicle aerodynamics projects from radio controlled vehicles like the XO-1, bicycles, world land speed record vehicles or for OEM's Tier 1 suppliers.