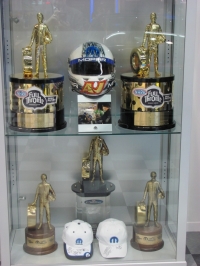 CHICAGO – RIS – Automakers use auto shows to bring attention to their new products. The media preview prior to the start of the 2013 Chicago Auto Show at McCormick Place was no exception (public run February 9-18, www.chicagoautoshow.com ).

Yet it seemed a little odd that Ford took the opportunity to show off its performance racing vehicle the Ford Fiesta ST Global Rally Cross race car, with its drivers Tanner Foust, Brian Deegan and Ken Block, instead of trotting out some new production vehicle. What have they got up their sleeves?

The youth oriented tuner market may be lusting over this racing Ford Fiesta and the Ford Focus TrackSTer that sat alongside the Rally car.

Ford said that it teamed up with Ken Block to push the envelope of performance and develop its ST brand.

According to Project ST partner Ken Block, “Teaming up with fifteen52 for this project was an obvious choice for me. They’ve got a great understanding of what’s hot in the small car performance marketplace right now, both from the style perspective and from the performance end of things. With the TrackSTer, they’ve worked closely with both Ford Racing and Mountune to put together a potent package that blends on-road performance with on-track performance. I can’t wait to actually get this car out on a track and put it through the paces.”

“fifteen52 was founded in 1996. Originally known for bringing high-end Euro accessories to the US VW/Audi market, they quickly branched out into the high performance world as well. Builder of many high-profile project cars such as the VWvortex.com chronicled Project X Mk4 Jetta coupe series, fifteen52 has consistently been on the cutting edge of the Euro aftermarket scene. In the late 2000s fifteen52 began manufacturing their own line of wheels, with their most famous model, the Tarmac, making its way onto Ken Block’s HFHV Gymkhana FOUR and FIVE 650-hp Fiestas. By recently teaming up with Ford Racing and Ken Block for Project ST, fifteen52 is set to expand its reach even further into the automotive aftermarket scene. To learn more about these projects, and follow their progress, check out www.fifteen52projectST.com.

The move is part of an expanded Global RallyCross program for Ford as it capitalizes on the growing popularity of the series and its increased visibility through X Games. .

Across the hall several other manufacturers at this year’s show were on the performance kick.

Nissan extended its high performance NISMO brand with the introduction of the 2013 JUKE NISMO to go along with their 2014 Nissan 370Z NISMO. Nissan promised a NISMO RS is not too far away.

According to the Volkswagen press release:

“Forty years ago, the sportiest version of the classic Volkswagen Beetle made its debut. Called the GSR (Gelb Schwarzer Renner or “Yellow Black Racer”), the vehicle was based on a 1303S and was instantly recognizable by its color scheme. Just 3500 units were built and they are now collectors’ items.

Today, at the Chicago Auto Show, Volkswagen of America, Inc. pays homage to that 1970s’ model with the world unveiling of the 2014 Beetle GSR. Striking in yellow and black, just like its predecessor, the GSR also debuts an uprated version of the award-winning EA888 2.0-liter turbocharged inline four-cylinder TSI® engine that generates 210 horsepower. This engine will be fitted to the Jetta GLI and Beetle Turbo during the 2013 model year, boosting their power by 10 hp. With this new car, Volkswagen has re-interpreted the 1970s GSR for the modern era.”

Chevrolet is going after the diesel market with its new Cruze Clean Diesel Turbo. It’s the only domestic diesel available. But the competition took notice and there is sure to be more diesels on the way.

Chevrolet also displayed its new Corvette Stingray that was unveiled at the North American International Auto Show in Detroit a few weeks ago.

All of the major manufacturers are at the Chicago Auto Show.  There are interactive displays, beautiful models showing off the cars and several indoor and outdoor test tracks where you can really sample all the new vehicles.

Auto shows are a great and inexpensive way to spend time with your family during the cold winter. So do yourself a favor and cruise on over to one near you.

Dave Chess has been writing for RIS since the late 1980s during the CompuServe days. His work has also appeared in Auto Week magazine, Chicago Gearhead News newspaper, ATA airlines in-flight magazine, National Speed Sport News and on many websites.