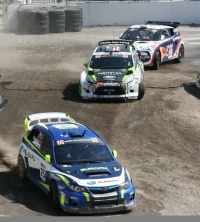 Global RallyCross will make its debut at Charlotte Motor Speedway when the series kicks off its 2012 season after the HISTORY 300 NASCAR Nationwide Race on May 26. (Photo: Global Rallycross)
View Image Gallery

CONCORD, N.C. (May 9, 2012) – The high-octane world of Global RallyCross, which mixes the energy of motorsports with the attitude of action sports, will bring its unique style of racing to Charlotte Motor Speedway as part of a racing double-header during the Coca-Cola 600 race weekend.

Following the HISTORY 300 NASCAR Nationwide Series Race on May 26, action sports stars Brian Deegan, Ken Block, Travis Pastrana and Tanner Foust, among others, will kick off the 2012 Global RallyCross season on a custom-built, three-quarter-mile RallyCross course, which will be constructed along the frontstretch and pit road of the famed 1.5-mile superspeedway.

“The addition of Global RallyCross makes an already packed 10 days of racing even bigger. It means more value for our fans and the opportunity to expose this fast-growing sport to a new segment of fans,” said Charlotte Motor Speedway President and General Manager Marcus Smith. “This is going to be one of the most unique races ever to take place at Charlotte Motor Speedway and I’m excited they’re starting their season here.”

Fans will have an up-close view of the action as drivers steer through hairpin turns, across crossover jumps and through a series of chicanes and water features designed to test every driver’s focus and control.

“Every jump and every corner, you’re driving on the edge,” Deegan said. “You have to push your car to the limit every race in order to come out on top. It’s nerve-wracking for the drivers, but that makes for some of the most exciting racing a fan could imagine.”

Drivers will be in the grandstands signing autographs and visiting fans prior to the start of Saturday’s Global RallyCross feature event. Throughout the Coca-Cola 600 weekend, fans can see the 600-horsepower turbo-charged machines in Rally Park, a special pit area set up outside of Turns 1 and 2.

“Kicking off the 2012 season at Charlotte Motor Speedway is going to be cool,” Deegan said. “I can’t wait to get back behind the wheel of my Rockstar Ford Fiesta and show the fans what these cars can do. Global RallyCross always puts on a good show, and with an entire off season to think about this race, there are a lot of drivers, like myself, who are ready to push the limits and get the season started.”

Tickets for the HISTORY 300 and Global RallyCross double-header start at $25. Children 13 and under are admitted free. To purchase tickets, call the Charlotte Motor Speedway Ticket Office at 1-800-455-FANS (3267) or visit www.charlottemotorspeedway.com.