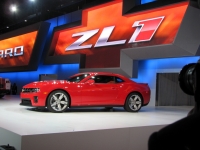 MAMA's featured speaker was Jim Farley of Ford Motor Company. It was kind of embarrassing for Ford. You see, Ford didn't have a single vehicle that met MAMA's rules for inclusion in the automotive media organization's first MAMA Family Vehicle of the Year award. Nope, not even the 2011 North American International Auto Show Truck of the Year Ford Explorer made MAMA's initial list.

But that didn't stop Farley from touting the Ford Explorer and the Ford Focus Rally TV interactive reality show. Hulu.com will broadcast the five episodes that will pit pairs of drivers in a rally format. The teams will also receive help achieving their tasks from social media aka Facebook users. That's the interactive part of the veiled commercial for Ford Focus cars.

By the way, the Hyundai Sonata won the 2011 MAMA Family Vehicle of the year award. The Honda Odyssey and Jeep Grand Cherokee were part of the top three finalists.

Racing Information Services chose the 2012 Chevrolet ZL1 Camaro as this year's best in show. The New ZL1 is the most technically advanced Camaro in history. According to the press release the ZL1 is, "Motivated by a supercharged V-8 engine producing an estimated 550 horsepower (410 kW), the Camaro ZL1 will be the fastest Camaro ever offered by Chevrolet. And more than just power, the ZL1 features technologically advanced and highly developed chassis and suspension systems that help it deliver balanced, track-ready handling and braking power to complement its high engine output."

Way better than the measly 465 bhp put out by the Hemi V-8 of the 2012 Dodge Charger SRT8 that also saw its debut at the Chicago show.

Dodge claimed its Charger SRT8 will hit a top speed of 175 mph. Chevy wasn't bold enough to reveal its performance statistics yet. But in terms of design and style, the Camaro wins hands down and its 85 more horses are sure to leave the Charger smoking its tires at the starting line.

See the street car section for the raw press releases.

Chevy also revealed their Indy 500 Camaro Convertible Pace car. There will be a special run of 500 pace car replicas which include special Indy 500 graphics, the SS package, and a 400 horsepower V8. Chevrolet and the Indianapolis 500 will both celebrate their 100 year anniversary during 2011.

Hyundai wants to run with the big dogs. The carmaker revealed its 429 horsepower Genesis R Spec to a group of raised eyebrows. It’s an autobahn sleeper.

The rest of the press reveals were a little boring. It seems Chicago is still the Second City when it comes to attention paid by automakers. They crawl over each other to try and make a point during the Detroit auto show media days and forget about the rest of the free world.