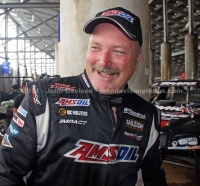 Scott Douglas enjoys a laugh at a press conference.

TORC PRO Light, PRO 2 & PRO 4 drivers to compete at a track Ricky Johnson envisioned when he helped found TORC in ‘09

CONCORD, N.C. – When Red Bull/Mopar/Ram/KMC Wheels’ Ricky Johnson looked out over the Jeff Nordstrom-designed & built Traxxas TORC Series, presented by AMSOIL, track on The Dirt Track at Charlotte Motor Speedway it was as if a longtime dream of his had come true for the off-road short course series he helped found in 2009.

In his adopted second home state of North Carolina, Johnson saw something the off-road stronghold of Baja California couldn’t offer – PRO-style TORC truck racing delivered to the masses right smack dab in the middle of a major metropolitan area.

“When I first walked up to the fence and looked out over Charlotte’s dirt track I was blown away. There, right before me, was the realization of what Mitch Covington, myself and the majority of drivers now competing on the TORC tour had dreamt about when we started this series,” said Johnson. “A true USAC/TORC, Jeff Nordstrom-designed track on Charlotte Motor Speedway’s dirt half mile, showcasing all of the series sponsors in a stadium setting that’s no doubt going to be packed this weekend.

“And packed with all kinds of new sets of eyeballs on our sport.”

For his part Nordstrom, whose background weighs heavy on building motocross tracks, “gets it,” according to Johnson when it comes to, in essence, building a stadium motocross (aka “supercross”) track for 4,000-pound, 900-horsepower TORC PRO trucks.

“To me this is a motocross on four wheels,” said Nordstrom. “The track’s real jumpy, technical with launcher jumps and rhythm sections. It’s got two mogul sections instead of one, including one built into the outside of the oval – something we’ve never done before. All the drivers I spoke with that saw the track are pumped to get out there. And it’s going to be real exciting for the fans.”

Where: Charlotte Motor Speedway’s Dirt Track When: Friday and Saturday, July 22-23 Time: Gates open at 3 p.m., qualifying begins at 4 p.m., main event opening ceremonies begin at 7 p.m. Tickets: $20 for adults, $10 for kids 12 and under. Note: NASCAR card holders get in for TEN BUCKS!!!

The Traxxas TORC Series, presented by AMSOIL, is the fastest, most punishing short course racing series on the planet! TORC events are packed with flag-to-flag fender banging as drivers push the limits over whoops and jump-filled natural terrain race tracks. Off-road racing fans come from far and wide to experience the most challenging form of high-octane competition. And once they taste TORC for the first time they’re hooked for life!

Spectator gate open to the public

Spectator gate open to the public

*Schedule is subject to modification; certain events may be run at a different time.

Editor's note: Drivers and officials met local media Thursday at The Dirt Track and showed the trucks that will be competing. With 18" of wheel travel allowed, the size of the jumps and bumps on the track, this should promise to be an exciting event.