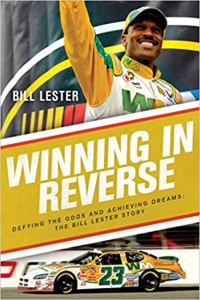 (CONCORD, NC - RIS) A Holiday Racer's Bookshelf: Looking for a different gift for the racing enthusiast on your holiday gift list? Would you rather find something other than team regalia or souvenirs in the giftwrap? Here are some suggestions that might start someone else on the path to reading more about our favorite subject: cars and racing. Not all of these books are still in print, but they can be found online or in a local second-hand bookstore.

Winning In Reverse tells the story of Bill Lester's move from being a West Coast computer industry project manager to the upper levels of IMSA and NASCAR. Lester moved from Sports Car Club of America amateur road racing to IMSA and NASCAR where he raced to an IMSA GT win at VIRginia International Raceway and nine years in the Camping World Truck Series, plus starts in Xfinity and Cup, earning a Truck series pole at Charlotte in 2003. Lester's story traces his first race experience as a child, where he discovered his true calling and is one of determination and resilience as he became the first regular driver of his race in NASCAR since Wendell Scott. Arguably, his career helped set the groundwork for Bubba Wallace's successes in stock cars. It's a story of a warm family life with and his progression from a car-obsessed youth to the professional racer he became, with clues to the readers on how to take his lessons and apply them to any career path.

Crash is Jonathan Ingram's history of Jim Downing's struggles to design and perfect the HANS Device. Arguably the biggest safety advance in racing since seat belts or modern helmets, the HANS Device limits uncontrolled head movement in a crash, helping reduce the chances of basal skull fractures like the injuries to Adam Petty, Neil Bonnett and Dale Earnhardt Sr.

Let 'Em All Go is Chris Economaki's memoir, with his tales edited by Dave Argabright. Economaki was the longtime editor and publisher of National Speed Sport News and TV commentator almost from the first race broadcasts on TV. One of the great raconteurs of racing, his tales of racing and the personalities involved make a great reference work and insight into the sport.

Growing Up NASCAR by Humpy Wheeler with Peter Golenbock details Wheeler's youth in a small town and how he became possibly the best promoter in stock car racing. One story he relates shows the personality behind the promoter: in his teen years, restoring and reselling bicycles in his hometown of Belmont, NC. One year, he delivered a bike to a man who obviously had only the money to pay for the bike and Humpy tried to refuse payment for it. “We argued for about three minutes, but he made me take the money. He was wearing old overalls, and as I turned to go, I brushed past him and shoved the twenty back in his pocket, and I left. It was the best Christmas I had in a long time.”

Miller's Time by Don Miller: Miller’s arc through motorsport started in drag racing and hot rods, with a 1930 Model A five-window he quickly converted from a flathead to a Chevy small-block. Army service in the 50s didn’t stop his interest in cars and racing and he moved on to continue to race, sometimes legally, in drag races. Miller’s path crossed Roger Penske’s and Penske recognized the human capital in him. The rest is a fascinating history of successes, some failures, joys, pain and friendships. The pains are best exemplified by the pit road crash at Talladega in 1974 that took off one of Don’s legs and- nearly cost him his life. The story of his recuperation and support from racers and everyday people make the chapter worthy of inclusion in a 'Chicken Soup for the Soul' book. Other chapters describe finding Kurt Busch, Ryan Newman and other racing stars. Miller's Time is published by Coastal 181 and worth the effort to locate a copy.

If you think that memoirs and history are less attractive, there is the series of books by Burt Levy, beginning with The Last Open Road and following protagonist Buddy Palumbo through discovering racing, advancing all the way from amateur club racing at the first Watkins Glen street race through LeMans. Levy's style is conversational and keeps the reader's attention through the entire series. Levy's first manuscript was turned down by every publisher he approached so he finally decided to self-publish. When the book started selling well, a publisher picked it up and the rest is history.

If you want a book that has been on the best seller lists, there is Garth Stein's The Art of Racing in the Rain. Based on Stein's own experiences in becoming a racer, plus the travails of a friend, Art became a publishing star, remaining on the NY Times best seller list for three years and was made into a Patrick Dempsey produced movie starring Milo Ventimiglia. The book's (and movie's) narration is by an unusual character, a dog. Think of a 21st Century version of Old Yeller for the racing world. Bring a box of tissues and enjoy a great book.

There are many more books worthy of a race fan’s attention, covering all forms of motorsports. There are multiple titles on karting, drag racing, motorcycling, rallying and how-to guides on repairs and restoration. More interesting titles include Alex Zanardi's My Sweetest Victory, Faster! by Jackie Stewart, plus hooks on the histories of many speedways and race series, so don't think that 'they didn't write a book about…' but do a search for your favorite topic.

A few more obscure titles are: Andrew Giangola’s The Weekend Starts on Wednesday; The Dirt Under The Asphaltby Jack Flowers; and He Crashed Me So I Crashed Him Back by Mark Bechtel. All these books are well worth adding to your holiday gift giving or request lists.