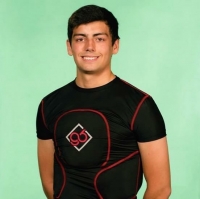 Wallingford, CT (September 1, 2020) Marotti Autosport announced today that it has signed Simon Sikes, the current points leader in the F1600 racing series, to race in this week's Cooper Tires USF2000 Indianapolis Grand Prix. The races will take place at the Indianapolis Motor Speedway Thursday and Friday, September 3 and 4.

“This is the biggest opportunity of my life,” Sikes, 19, said. “I’m honored to work with such a determined and inspired man such as Will. I have always wanted to race in USF2000, and now we have set our minds to figuring out how we can run the full season together next year."

With backing from Medi-Share, a healthcare sharing ministry that partners with Marotti, Sikes will make his first-ever trip to the world’s most historic racing venue. The announcement continues Marotti’s partnership with Legacy Autosport. Legacy isa professional racing team operated by the Meyer family, whose grandfather and great grandfather was Louis Meyer, first three-time winner of the Indianapolis 500.

“We tested Simon at Putnam Park recently, and he showed us he has the right stuff,” said Marotti. "We are super excited to have Simon join our team. We want to make his first trip to the Speedway a great success."

Sikes has turned heads with his success in the F1600 Championship Series, where he has faced the true test of intense competition. He currently holds a healthy points lead in the season championship with two races remaining. He plans to finish out the season to secure the championship trophy. There are no schedule conflicts with USF2000.

Marotti brings proven experience in sponsorship attraction and retention. With another of their partners, PW Power Systems, they teamed with Vasser-Sullivan Racing/Dale Coyne Racing at the Indy 500. They enjoyed a great result with their driver Santino Ferrucci finishing fourth.