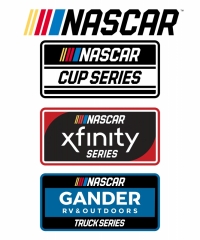 Starting with this weekend's races at Michigan International Speedway, NASCAR will incorporate the 'choose rule' into the restart procedure for all national series races except those held on road courses and superspeedways (Daytona and Talladega). The rule made its NASCAR national series debut during the NASCAR All-Star Race at Bristol Motor Speedway last month. As drivers approach a designated spot on the track, they must commit to the inside or outside lane for the restart. The rule will add strategy and is especially important on those tracks that have a distinctly dominant lane on restarts; the drivers will have their choice of track position or the preferred lane as the race returns to green flag conditions.

In addition, beginning with the Daytona Road Course event, NASCAR will now use three competition-based performance metrics to determine the starting lineup – including the Busch Pole Award in the NASCAR Cup Series and the Cometic Gaskets Pole Award in the NASCAR Gander RV & Outdoors Truck Series – and pit selection order for each race, replacing the random draw procedure that has been in place for a majority of races since NASCAR's return to racing at Darlington Raceway in May.

NASCAR will reward both season-long and single-race performance to determine the lineup and pit selection, using owner points position and the finish and fastest lap from the most recently completed race.

"Considering feedback from teams, drivers and fans, NASCAR has implemented these changes to enhance competition as we approach the Playoffs," said Scott Miller, NASCAR senior vice president of competition. "We received nothing but positive comments from the drivers on the choose rule following the All-Star Race, and felt it was an important addition to the restart procedure. The random draw has served us well during the return to racing, but it is important that starting lineups are based on performance as we approach the Playoffs. The entire industry is aligned on implementing a competition-based system to determine the starting lineup and pit selection order."

Asked about the choose before this announcement Brad Keselowski said that "there are parts I really like about it.  There are parts I don't so much like about it.  I really would like to get some reps on it and then take it from there.  I was probably a little more hopeful that it would go to a lower series first and they could work the bugs out, but that's okay.  I don't know what I don't know and that's what makes me most nervous."

Watch here for updates as we get driver and other comments.