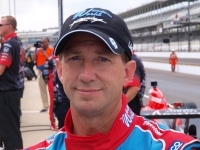 John Andretti died this week at 56. Way too young. I followed his career, at first, because he was an Andretti, then after meeting him and chatting several times, because he was simply a nice guy and a heck of a racer.

By now you have seen his stats, 11 Indy 500’s, hundreds of NASCAR races, and so on, but I most remember him from a few go-kart races when I had the chance to race him myself, at the annual Race 4 Riley charity event.

Two memories really stand out for me. I was in third place about half way through the race, and a kart clobbers my rear bumper, yep, that was John giving me a little love tap on his way to a win. I learned I was no Andretti!

The second memory was the next year in the special media race. Me, Dave Calabro, from WTHR-TV in Indy, and Dave Furst, from WRTV-TV in Indy, had a huge battle going for the lead dodging a bunch of media folks that had never driven a kart before. It was an epic kind of race, clean but very, very, tough. I got a second. John came up after and said “Wow, that was a hell of a race, you guys put on a show.” I can not tell you how that made me feel, a slap on the back from one of my hero’s!

I was at the press conference at the Indianapolis Motor Speedway in April 2017, when John revealed he had stage four colon cancer. He admitted he had put off getting a colonoscopy, he said he did not like doctors. He became an advocate for getting that simple check-up when you turn 45 years old. He started the “Check-It-For Andretti” campaign.
Please do it, get a check-up.