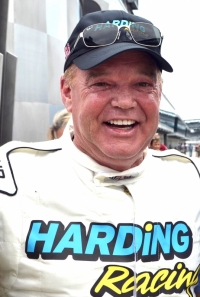 Southlake, TX (September 12, 2019) – Indy car champion Al Unser, Jr. announced today that he is entering Sportscar Vintage Racing Association’s (SVRA) Vintage Race of Champions (VROC) Charity Pro-Am presented by Chopard Watch at Virginia International Raceway (VIR). Unser, who has always run at the front in previous VROC Charity Pro-Am races, joins a stellar field of legendary drivers reminiscent of the original IROC series. Many in the VROC field competed in IROC, including Unser and Bobby Labonte, both of whom became champions of that iconic series. The September 21 VROC Charity Pro-Am at VIR is the final event in the series and will decide the VROC B Production (BP) and A Production (AP) championships.

“I am delighted to race once again in the VROC. It’s great competition and I have nothing but respect the SVRA drivers,” Unser said. “I want to thank Mike Harding and George Steinbrenner for giving me the time off from their Indy car team to do what they know I love best – race cars. The VIR course is particularly challenging and I look forward to having another crack at it because I never got completely comfortable last year.”

“I consider Al a great friend to SVRA,” said SVRA CEO Tony Parella. “Since he won our first Pro-Am at Indy in 2014, he has been a big factor in building our VROC brand.”

Unser is a two-time Indy car champion (1990 and 1994) and the winner of 34 Indy car races including the 1992 and ’94 Indianapolis 500s. His 1992 Indianapolis 500 victory remains the closest finish in history with a margin of just 43 ten-thousandths of a second over runner-up Scott Goodyear. A versatile driver, he was a winner in World of Outlaws sprint car racing, 1982 Can-Am champion, and IROC champion in 1986 and again in 1988. He’s also a two-time overall winner of the 24 Hours of Daytona in 1986 and ’87. Like his father Al Unser Sr. and Uncle Bobby Unser he enjoyed tremendous success as a star driver for Roger Penske’s team, which provided his winning entry for the 1994 “500.” Unser is currently a strategist for the Harding-Steinbrenner Indy car team which is competing at WeatherTech Raceway Laguna Seca the same weekend.

Chopard, the Swiss artisan of luxury timepieces, and the Official Watch of SVRA, will present an SVRA-branded watch to the champions of AP and BP, both professional and amateur, at VIR. It is modeled after their prestigious Grand Prix De Monaco Historique Race Edition timepiece. Since 2002, Chopard has served as sponsor and official timekeeper at the renowned Grand Prix De Monaco Historique. Among the professionals, current leaders in the VROC point standings are Willy T. Ribbs (AP) and Davy Jones (BP). Both will be on hand to gun for the titles.

The VROC Charity Pro-Am presented by Chopard Watch is a Saturday feature event at VIR and will benefit IGNITE – the Autism Society of North Carolina’s community center for young adults with high-functioning autism or Asperger’s syndrome. The cars are 1963 to 1972 vintage Corvettes, Camaros, and Mustangs of SVRA “Group 6” A and B Production.  The professionals will be paired with amateur drivers. Amateurs will start the race and be required to drive a maximum of seven laps. In addition to the Pro-Am, the Speed Tour VIR weekend is a festival of other activities, including professional Trans Am by Pirelli series races on Saturday and Sunday. The weekend also presents the Hagerty Insurance “cars & caffeine” car corral, and 300+ vintage racers ranging over 100 years of automotive history racing in SVRA Groups 1 through 12.