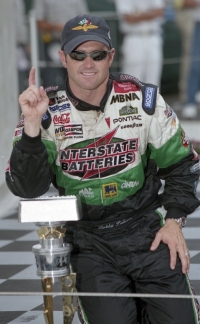 Southlake, TX (July 18, 2019) – Sportscar Vintage Racing Association (SVRA) announced today that Bobby Labonte, one of the biggest names in the annals of NASCAR history, has entered the Vintage Race of Champions Charity Pro-Am presented by Chopard Watch. The race will take place at the Indianapolis Motor Speedway on August 3.

“Bobby has become a good friend to our sport,” said SVRA President and CEO Tony Parella. “He’s still an active race driver in the NASCAR Whelen Series, and, of course, has TV and various other commitments, so I am honored that he makes the time to race with us for charity. I like to believe it underscores just how quickly our VROC Charity Pro-Am series is ascending.”

Labonte is the first driver to win both the NASCAR Cup Championship (2000), and the Busch Series Championship (1991). He backed up those accomplishments by winning the elite 2001 IROC Championship with two victories in the season’s four races. In a NASCAR Cup career that spanned 24 seasons Labonte amassed 21 race wins and 26 poles. In what is now the Xfinity Series he scored 10 race wins and 10 poles. He is one of a handful of drivers to rack up victories in all of NASCAR’s top three series: Cup, Xfinity, and Trucks. It was announced in May that Labonte will be inducted into the NASCAR Hall of Fame, class of 2020, in January. He is also a member of the Texas Motorsports Hall of Fame.

Labonte has extended his career since leaving NASCAR Cup racing in 2016, both as a driver and motorsports analyst. He is currently running his second season in the NASCAR Euro Whelen Series. Labonte is fresh from an appearance in the world-renowned Goodwood Festival of Speed (FOS) earlier this month. There he drove a vintage Joe Gibbs M&M Toyota Cup racer up the famous hill climb. He also serves as an analyst for Fox Sports 1 (FS1) Race Hub and Race Day TV programs.

The Indianapolis Motor Speedway Brickyard Invitational VROC Charity Pro-Am will benefit the Morgan Adams Foundation. The foundation supports laboratory and clinical research in the area of pediatric cancer, with an emphasis on tumors on the brain, spine, and central nervous system. Morgan Adams was a five-year-old girl who lost her battle with brain cancer in 1997. The foundation has a history of working with vintage racers to support their cause.

The VROC Charity Pro-Am presented by Chopard Watch is a Saturday feature event at the Brickyard Invitational. The cars are 1963 to 1972 vintage Corvettes, Camaros, and Mustangs of SVRA “Group 6” A and B Production.  The professionals will be paired with amateur drivers. Amateurs will start the race and be required to drive a maximum of seven laps.

The Pro-Am is one element of SVRA’s “Speed Tour,” where there will be a festival of other activities at the Brickyard Invitational including professional Trans Am by Pirelli series races on Saturday and Sunday. The weekend also presents the Hagerty Insurance “cars & caffeine” car corral, and 300+ vintage racers ranging over 100 years of automotive history racing in SVRA Groups 1 through 12.

Brickyard Invitational ticket information: Fans can order Brickyard Vintage Racing Invitational tickets for either or both days of the event online through the Speedway or by calling 800-822-INDY or 317-492-6700 between 9 a.m.-5 p.m. (ET) Monday through Friday.  Fans can also visit the ticket office at the IMS Administration Building at 4790 West 16th Street between 9 a.m. – 5 p.m. (ET) Monday through Friday. Tickets for groups of 20 or more also are available. Contact the IMS Group Sales Department at (866) 221-8775 for more information. Children 15 and under are admitted free each day when accompanied by an adult. RV camping passes in the IMS infield start at $60 and camping access begins Friday, August 2.