INDYCAR - Dominant day for Simon Pagenaud at the 103rd Indianapolis 500 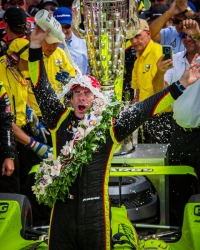 The weather forecasters missed it today, which was just fine with the packed house at the Indianapolis Motor Speedway, as partly cloudy skies prevailed over the 103rd running of the Indianapolis 500 and Simon Pagenaud capped a perfect month with his first win.

Storms materialized on the track instead, with Alexander Rossi uncharacteristically furious over issues in the pits as well as lapped cars blocking his progress. Rossi made dazzling passes before and after his pit woes (fuel nozzle malfunctioned), carving his way to the front.

Indy Grand Prix and 500 pole winner Pagenaud predictably took the lead at the green flag, with the fireworks happening at the back of the field. Veterans like James Hinchcliffe, Ryan Hunter-Reay, Graham Rahal and Scott Dixon started much farther back in the field than expected and put on a show in the opening laps pushing toward the front. By the 28th lap, there were 100 on-track passes.

The first yellow came quickly, with rookie Colton Herta suffering gearbox issues on lap 3 and failing to make it into the pits.

Pagenaud pitted first on lap 33, getting worse fuel mileage due to running in the lead. From that point on, the focus was on comparing Pagenaud’s stints to those of Rossi, Ed Carpenter and team mate Josef Newgarden, who were getting much better mileage. Despite Kyle Moyer’s pleading from the pit box for Simon to fall back and save fuel, the Frenchman led 116 of the 200 laps.

A round of pit stops starting at lap 65 brought a few incidents, including both Will Power and Jordan King hitting crew members. King received a drive-through penalty and Power sent to the back of the lead lap as a result. The second yellow occurred on lap 73 when Kyle Kaiser spun into the Turn 4 wall. He was unhurt.

Rossi was challenging Pagenaud for the lead by lap 112, with Kyle Moyer sill pleading for Simon to let him go by and draft him to save fuel.

The next caution period came on lap 138 with Marcus Ericsson spinning in pit lane and making contact. During that same pit window, Rossi’s team had problems with the fuel hose nozzle and his pit stop took 23 seconds. Rossi repeatedly pounded his steering wheel and screamed, “What are we doing?” over the radio in an unusual display of rage from the normally-placid Californian. Rossi cycled in at 13th after the incident and put on a fierce passing clinic to re-engage Pagenaud at the front. On a number of laps, Rossi hugged the pit wall on the front stretch to steal the inside line and make the pass going into Turn 1.

Meanwhile, Pagenaud was drafting the pace car during this caution to save as much fuel as possible. Once the green flew again, Rossi kept carving his way toward the front, on one occasion wildly-gesturing his displeasure with the lapped car of Oriol Servia who holding him back. Rossi finally passed Pagenaud for the lead, which was immediately followed by the largest on-track accident of the race.

On lap 178, Graham Rahal was pulling alongside Sebastien Bourdais on the inside line of Turn 3 when the two touched, setting off a multi-car incident that took out Rahal, Bourdais, Felix Rosenqvist, Zach Veach, and Charlie Kimball. The yellow flag flew for the final time, followed by a red flag to allow the track to be properly cleared for the final laps. When the green flag flew again on lap 186, Rossi and Pagenaud swapped the lead several times, both looking like they’d pull away from each other and then swapping the lead again. Kyle Moyer passed along the info to Pagenaud that Rossi had been passing down the inside on the front stretch going into Turn 1. Pagenaud spoiled the pattern, hugging the pit wall each time down the front stretch, making Rossi pass him on the outside. With 1.25 laps to go, the final lead change of the day occurred, with Pagenaud overtaking Rossi and holding the Californian off for the win.

It’s the 18th Indianapolis 500 win for Team Penske, to go along with the team’s 18 Indy 500 poles. The win erased any doubt that Pagenaud would remain with Penske after this season and the month marked a strong comeback for the Frenchman, who failed to win a race in 2018.

The full results of the race are available here.