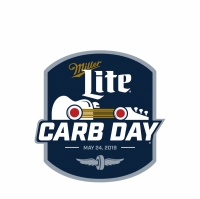 THE MODERATOR: Welcome to the media center. We have the winners of the Pit Stop Challenge. A little background, this event has been held since 1977, won by McElreath the first year and there's been a lot of history of Penske and Ganassi, and this race team right here, Arrow Schmidt Peterson Motorsports, took down the reigning champs, if you will, went through Josef Newgarden, Will Power and then Scott Dixon to win this one.

Marcus Ericsson becomes the fifth rookie to win the pit stop challenge after some big names, including Michael Andretti, Jacques Villeneuve, Buddy Rice and Kenny Brack. You're the second Swede to win this, and six of the winners over the years have gone on to win the race. How about that? 50 grand, too, and the team -- I'm going to take a flier here is that you can't introduce everybody on the team. You're so new to the organization. Can you do it? He's not doing it.

How about everybody give your name and what your role is on the crew.

KEITH BECK: And outside rear.

THE MODERATOR: Marcus, take us through how exciting this was. It took you three rounds to eliminate Scott Dixon, and on the broadcast they made a lot of hype about your standing start experience. Maybe that came into play, maybe it didn't. Talk us through this.

MARCUS ERICSSON: Yeah, I think for sure we had some good starts, but what won us this competition was pit stops. Every single pit stop was amazing. That's why we won today. It's a great reward because these guys have worked so hard all year, and I've had a couple of incidents during the season and they've always worked so hard to get me out there on the track again. For me to win a competition like today, it's just a great reward for all that hard work that these guys put in every single day.

THE MODERATOR: If someone on the crew wants to talk about the significance of this for the team and the momentum going into this weekend's race.

BOB JANSEN: We've been in second place the last three years, so it was a big motivator for us to get over that hump, and so we're glad to finally be on the top. But Ganassi was great competition. Everybody did great stops today. Can't say enough about all the guys, how great they did.

THE MODERATOR: Marcus, was this nerve-racking for you, a big crowd, a lot of pressure?

MARCUS ERICSSON: I mean, I went out there when I walked out, and I was like, this is all fun and games, and then you come out there, you see the crowd, you see how pumped all the guys are, and you're like, all right, let's do this. You know, it is fun and games, but it is so much competition at the same time. When you're in the car we want to win, and we went out and did everything to do that, and I'm sure every single one out there tried to win 100 percent today, and we managed to pull it off. So yeah, it feels pretty good.

Q. Marcus, obviously you've got a lot of experience with pit stops in Formula 1; were you able to use that to your advantage today in the pit stop competition?
MARCUS ERICSSON: Like I said, I think as a driver on this competition, it's about reactions and then try and be precise on the stops, but I wasn't even precise on my stops, I was just a bit long on both my stops in the final, or two out of three. So I think credit goes to the guys because they managed to do amazing stops. I think they were the ones that made a difference today.

Q. Bob, could you just comment on how important your job as a pit crew really is and how much pressure you guys put yourself under?
BOB JANSEN: We do our best to keep it fun, try to keep it light, not put too much pressure on it. Everybody knows how important the stops are. But it's still a matter of we do a lot of training in the off-season, in the gym with St. Vincent's and in the shop doing pit stop practice, things like that. It's all about not stressing and not putting too much emphasis on it, even though it is obviously a key factor of every race.

Q. For the crew, with winning an event like this, I know it's all fun and games, but heading into Sunday, does that give you guys any confidence going forward with just your pit stops are in top shape?
MARCUS ERICSSON: I think just in general, seriously, IndyCar where it's so tight between the field, you can win or lose races in the pits. That's why to have a good pit crew that does good pit stops can be, yeah, the difference maker in a tight race. I think for us to win this is going to give us so much momentum going into Sunday, and I think it's great, you know.

Q. For anyone on the team, how does competing in an event like this, much less winning it, build that team spirit and team camaraderie especially with a brand new driver?
BRENDON CLEAVE: A lot of long hours and everything else and to see the rewards come out of it, I think it's a good boost for everybody, especially coming into Sunday, it's been a long month. It's going to be a long month next month. This is a good slap on the back, and good job, and let's go do it on Sunday.

MARCUS ERICSSON: I just want to add, as well, when I signed my contract back the end of last year, it was just the offseason and not much going on, and I came to the shop the first time and I think it didn't take more than a couple of hours, and the guys were, like, all right, let's jump in, let's do some pit stop practice.

So all that work that these guys put in even over the off-season to practice these things and perfect it, that's what makes a difference, and like I said, these guys are really putting in the hours, and yeah, it really showed today.

THE MODERATOR: Marcus, you have not experienced something like this in any form of your career?

MARCUS ERICSSON: No, I've never done anything like this before, but it was really cool. It's such a cool event. This whole month has been amazing, and today was a really cool day, and to finish it off by winning made it even better.

Q. You said just before that you already have been in very top in the competition. Did you feel the pressure of everybody seeing you and believing what are you doing individually that will help to win this competition? Is it like your little -- big point in the weekend for the team?
BOB JANSEN: It was definitely the highlight of the weekend so far. Hopefully there's a bigger highlight on Sunday. But it was definitely an amazing thing. Everybody, every single one of these guys, nothing but absolute trust in to do their job and do their job extremely well, and it showed in the end that we are a team to beat on pit lane.

Q. My audience, we're almost all of us sim racers that we couldn't be driving a car, and we always wonder how you get not only driving a car because that could be like the common dream, but how you get to be part of a crew in an IndyCar. How is that part that you have run all over the years?
BOB JANSEN: Personally I think every single person on this crew has probably had a different path. Everybody has gotten there in different ways, whether it's you're born into it, your family was racing or you went to school for it. There's a lot of different ways to achieve it. But it's all about hard work and dedication.

RYAN MARZEC: And a passion for motorsports.

Q. Bob, how much attention to detail do you guys put into what you do here?
BOB JANSEN: Whether it's pit stops or the race car itself, that is the biggest thing that we have to do is attention to detail. It's 100 percent most important, especially going into a long race like this. You have to make sure everything is perfect, not just the pit stops but the car itself.

Q. Marcus, we haven't had you in here to talk about your prospects for the race. You talked about the first month here a little bit, but how do you feel going into the weekend?
MARCUS ERICSSON: I feel great. I think we've had a really good month, and again, the team has just helped me to learn driving on an oval. It's been a big learning process for me. I've never done anything like it before, and every day I've been out there on track, I've been just learning stuff, and all the guys in the team has been helping me there, and I have great, great teammates, as well, with their experience, that I can ask questions to, and also Robby has been here most of the month, Robert Wickens, and helping us with advice, as well. So that's just helped us take it step by step, and I think we've built up to it really nicely.

We had a very good qualifying last weekend. Lining up in 13th I think is a great place for the first time we're here, or I'm here, so yeah, we're very excited for the race and can do a lot of things from there, and obviously we're going to kill it in the pit stops, as we saw today, so that's going to make a difference in the race on Sunday. So I'm really excited.

THE MODERATOR: Congratulations to this race team, and a big shot in the arm going into the weekend. Thank you.

BOB JANSEN: One more thing I'd like to say. Thank you to all the sponsors, INDYCAR, the speedway, everybody for putting on this event for everybody. It was really awesome. There was a lot of donations that came in, and it was really great of everybody that pitched in to make this happen.