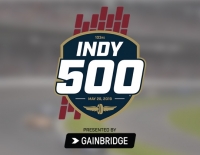 INDIANAPOLIS -RIS- (May 14, 2019)  Welcome to Racing Information Service's coverage of the 103rd running of the Indianapolis 500-Mile Race. RIS on-site coverage of Indy began over thirty years ago, and remains the longest-running online news source for the Greatest Spectacle in Racing.

That said, this is a new year. The Indianapolis 500 - the crown jewel of the NTT IndyCar Series - is the first oval on the 2019 schedule. With a field containing a number of talented rookies with virtually no oval experience, today's practice session will start to shuffle the cards.

There are currently 36 car/driver combinations to fill 33 positions on the Race Day grid. The most-recent addition today is ten-time Indy 500 veteran Oriol Servia, running the Team Strange Dallara Honda in cooperation with Arrow/Schmidt Peterson Motorsports. Servia's addition is likely to be the last, as both engine manuafacturers (Honda and Chevrolet) are likely maxxed out for Indy.

Keen-eyed readers will note that former series sponsor, Verizon, has pulled back following the conclusion of their contract, and remain on the race cars of the organization that brought them to IndyCar, Team Penske. The new series sponsor, NTT, comes via Chip Ganassi Racing. NTT is a global information services and networking service.

There have been five races thus far this season, with five different winners:

Stay tuned through the week for news and photos from practice and qualifying before the annual running of the Indianapolis 500 on May 26th.