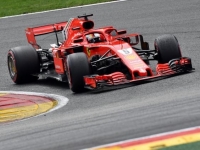 SPA-FRANCORCHAMPS, Belgium—R.I.S-- After passing Lewis Hamilton Sunday at the Belgian Grand Prix on the opening lap at Spa-Francorchamps, Sebastian Vettel had no problems afterwards, beating his series rival by 11 seconds, winning his 52nd race and his 107th career podium. In addition, the German now trails his British adversary by 17 points in the championship, going into next week’s European season finale in Italy. Max Verstappen delighted his Dutch supporters by taking third.

Vettel knew that the move on Hamilton on the Kemmel straight would be the main point of the race and felt that it was done well.

“On the first lap, I had great start” Vettel replied. “I'm not sure Lewis saw me -- he pushed me quite far to left. But I knew my chance would be later on up the hill, and I think I timed it well. Obviously last year I was always ending up short. It was better this year, we had a bit less wing. Timing is crucial and I managed that perfectly I thought."

Vettel and many others up front escaped a first lap incident at the opening corner at La Source when Renault’s Nico Hulkenberg braked too late, crashing into Fernando Alonso, who in turn, catapulted over the Sauber of Charles LeClerc, who escaped injury by having Alonso’s wheel touch the Monegasques Halo unit, preventing LeClerc from having a serious head injury. For this day, the controversial device had proved its dependability.

In addition, Daniel Ricciardo also braked late on the same corner, damaging his front wing by running into Kimi Raikkonen, who suffered a right rear tire puncture and limped into the pits for a wheel change. However, both drivers retired from the race with structural damages from this incident.

Vettel meanwhile, did not know about the situation and following the drive up Eau Rouge, used his DRS system and passed Hamilton going through Kemmel straight. Esteban Ocon, who started the race in third, had the opportunity to pass Vettel from the inside, but was trapped and had to back off to fourth position. Just seconds later, the safety car came out for the only time in the race, which lasted for four laps before Vettel continued to lead after getting a good restart.

Vettel continued to lead and was only challenged when he brought his Ferrari in for his first of two pit stops on lap 23. But the German regained the lead again, but now with Hamilton and Verstappen right behind him, with no more than two seconds behind. Vettel kept his pace fast enough where Hamilton could not catch him, leading with a gap of over ten seconds with two laps to go, before winning by 11 at the finish.

Valtteri Bottas made a last-minute charge, starting the race from nearly the back row, and took fourth. Both Force India’s Sergio Perez and Ocon finished Fifth and sixth, respectively, while the American Haas F1 Team took the next two positions, with Romain Grosjean seventh, and Kevin Magnussen in eighth. Pierre Gasly was ninth in the Toro Rosso, and Markus Ericsson gave the Swiss Sauber team one point, finishing in tenth.

Following the first few laps, Vettel settled into a mode that pleased him, knowing that the lead Hamilton had is narrowed. And with next week in Monza, it could give more of a psychological opportunitiy for the Scuderia knowing that the following race will be on their home turf in Italy.

"After that (the first lap) it was a very smooth race.” Vettel continued. “Lewis (Hamilton) pushed hard, especially the first stint towards the end, he was very fast. Second stint, could turn everything down and control the pace. Great weekend."

A 16 year veteran of writing formula one racing weekend race reports, features and team launches, Mark has worked for such companies as all-sports, e-sports, The Munich Eye newspaper in Germany, racingnation.com and Autoweek. A former member for this site four years ago, Mark now is a contributor for R.I.S.