Got DIRT? A Racing Film for the Ages. .. 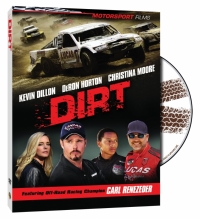 DIRT will be available to viewers for streaming and download to watch anywhere in high definition and standard definition on their favorite devices from select digital retailers including Amazon, CinemaNow, iTunes, PlayStation, Vudu, Xbox and others. Starting March 20, 2018, DIRT will also be available digitally on Video On Demand services from cable and satellite providers, and on select gaming consoles.

I had the great opportunity to preview the racing film, DIRT, by Forrest Films and ESX Entertainment that just happened to include a ton of trucks racing, mud and tempers flying, luxury cars drifting, logo placements, hugs being dished out, first class acting/filming/writing/music, great ‘fake-outs’ and perfectly timed jokes. All the right people and their talents, desires and effort came to fruition in this captivating racing film…

For former Off Road Truck racing driver Rick Radden (Kevin Dillon) and teenage carjacker Dez Truss (DeRon Horton), second chances do not come easy. However, another shot is just around the bend. Watch as worlds collide for this unsuspecting duo when Warner Bros. Home Entertainment releases DIRT, on Digital March 6 and on DVD March 20, 2018.

Caught boosting cars for an auto-theft ring, 17-year old Dez Truss is given one last chance to turn his life around. When he is introduced to former Off Road Truck-driver-turned team owner Rick Radden, neither suspects that this is the change both so desperately need. In exchange for a roof over his head, Dez is offered the chance to use the skills he developed in the streets as part of the pit crew for Rick’s team. Faced with an underperforming and apathetic driver, Rick finds himself in search of a lifeline for his struggling off road racing team. In an unexpected turn of events, he looks to Dez to take the lead and become the new face of Team Radden. But, does Dez have what it takes to end the team’s losing streak? Will his life of crime catch up with him as he looks to turn over a new leaf?

Actress and first time credited producer, Christina Moore, played Radden’s wife, Glenda. Christina stated how she put her personal life on hold for two years to give 110% to make this film a success. She apologized to her significant other as she addressed the 700 plus people in attendance. She commented how much of a non-stop effort it was bringing together all the sponsors, talking to the various corporate types and brands and getting product, logo releases, swag and the film crew to make this film – happen! Christina admits that she is not a racer at heart. “NO, I am the girliest of all girly girls,” she stated.  “After going to one event, if you have never been to an event of this caliber, you don’t know what you are missing. It is like THE most exciting sport. It is like motorcross, demolition derby and drag racing – LIKE BOOM (she claps her hands to make her point home). You can literally watch the whole race from your seats; hairpin turns, truck pieces flying or trucks rolling all over themselves or being  run off the track and more.” When asked, after everything was said and done, what was the most exciting memory you have from doing this film? Christina replied, “Producing was the most exciting part for me!”

It would seem to be the last film one would think a Rolls Royce would be seen in a four wheel drift but it worked perfectly, twice. Hey, if you are going to boost a car – make it a luxurious $400,000, 624hp Wraith and – it sounded just right. Gerry Spahn, North American Communications Chief for Rolls Royce Motor Cars, was in attendance. I never saw so many of the beautiful creations in one place at the after party held at Saddle Ranch Chop House on Sunset.

The film happened all because Ali Afshar, head of ESX Entertainment, met up with the man that started the Lucas Oil empire, Forrest Lucas, a handful of years ago and found out there was a mutual connection and need for a racing film of this caliber to come about. Mr. Lucas’ ownership of many sanctioned racing events, Lucas Oil Products, MAVTV, Lucas Oil Racing TV and a lot of mutual friends that race, gave Ali and his team plenty of latitude to make this exciting film. The film never languished or drug out like some romance or coming of age movies. In retrospect, the film had plenty of hard charging racing that was filmed either previously during actual races or as needed to fill in spots of the script but it was all – seamless.  Director Alex Ranarivelo was in charge of the – magic.

The winningest short-course racer in history (and a very winning off-road racer), Carl Renezeder, played himself during the film and expounded on his racing career to some of the media in attendance. He recently retired last year and is based in Lake Forest, CA.

Kevin Dillon, who played Rick Radden, team owner, chatted about his interest in motorsports. When asked what enticed or attracted him to this film, Kevin commented, “It always starts out with the script and the script is really solid. I liked it because it had a lot of cool and heart and then the backdrop was racing. I LOVE RACING. I like muscle cars. I build my own cars. I am into horsepower. I have never raced but have been out to California Speedway and did 183 mph. That was cool.” When asked what was the most personally exciting part of the film for him, he went off on a tangent stating how the character got hurt and he did not get a chance to race at all during the filming. It truly sounded as though he would have ‘personally’ liked it if that script that he loved would have gone that way for him. Kevin stated that Carl Renezeder wanted to get him in a truck with two seats but his schedule prevented that from ever happening. Okay, never say never. “I have always been into motorcycles and even have a Jeremy McGrath pinball machine called ‘No Fear’,” when asked what other forms of racing does he enjoy. He added, “I also enjoy NASCAR and motorcross but now after being apart of this film, this is my most favorite form of racing.” I brought Kevin back to my original question from moments earlier regarding what was the most personally exciting part of the film for him, “Just doing acting with some great actors and watching the racing up close.” Funny, I later overheard Kevin saying, while he doesn’t think he would have the ‘brass ones’ to do all that the top racers do, he still has a deep-seated affection for muscle cars, horsepower and speed.

The cast also includes Ntare Guma Mbaho Mwine (The CHI, Treme, Heroes, Bosch) Devan Long (S.W.A.T., Training Day), Matthew Glave (Feud, Girlfriends’ Guide to Divorce) and Dominic Devore (Small Arms, The Release) and Lexy Panterra, Dez’s computer hacking cohort. Funny, Dominic played Trent in the film; the ultimate, overzealous, ill-tempered, egotistical, girl magnet of a racer that left Radden’s team when Dez was brought onboard due to Dez's extenuating circumstances. It dawned on me later that I chatted with Dominic before the film who was so very mild mannered, well dressed, short haircut gentleman. I was amazed at the energy and persuasiveness he brought to the screen as he was a total **ick in his scenes. I met him after the film and jokingly stated,“You can really be a **ick if you want to be, uh?“ We both laughted. He was good.

DIRT will be available to viewers for streaming and download to watch anywhere in high definition and standard definition on their favorite devices from select digital retailers including Amazon, CinemaNow, iTunes, PlayStation, Vudu, Xbox and others. Starting March 20, 2018, DIRT will also be available digitally on Video On Demand services from cable and satellite providers, and on select gaming consoles.

I am a journalist/member of AARWBA and a member with the Motor Press Guild. I am an aerodynamicist with 28 years of aircraft design and flight test experience besides - automotive. I am a commercial pilot and have a website aeroseminars.com where I consult on a variety of vehicle aerodynamics projects from radio controlled vehicles like the XO-1, bicycles, world land speed record vehicles, Mach 3 target drones, motor vehicle stunts or for the automotive industry's OEM Tier 1 suppliers.