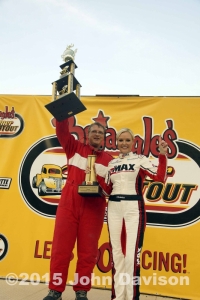 Speedway release: CONCORD, N.C. (June 23, 2015) – Historically, rookies struggle at Charlotte Motor Speedway, but that didn't stop first-time school bus racer Joe "Hot Wheels" Howard who ran away from the field to win the Media Mayhem School Bus Slobberknocker during Round 4 of the Bojangles' Summer Shootout at the legendary 1.5-mile superspeedway. Ashton Higgins and Jordan Black also took home the hardware during a full night of Legend Car and Bandolero action.

"I had a good bus. I have to thank the pit crew for that," Howard joked. "I got the luck of the draw, starting on the inside of the front row, so I got the holeshot and was able to pull away. It was great fun."

Although this race was his first behind the wheel, Howard admitted that he got some advice from co-worker and Security Force Masters division racer Herman Towe, who has also competed in several previous Media Mayhem events.

"We have a little bit of a trophy collection at work because of Herman," Howard said. "I think this one might be a little bit bigger than Herman's, so I can't wait to show it to him."

Higgins took home his third win in four rounds of Bojangles' Summer Shootout action. With a four-wide battle for the lead on the opening lap, Higgins took charge after lap five. Even after three cautions, Higgins never lost his lead. The young driver pulled away from Blaise Brinkly and Connor Younginer, who finished second and third respectively.

Black won Tuesday night's Pro division feature, taking home his second win of the Bojangles' Summer Shootout Series season. Joey Padgett was dominant during the first 15 laps of the race, while Black battled Dillon Faggart, Jared Irvan and Michael Torres for the second position before taking the lead from Padgett on lap 16. The race had a single caution on lap 7 when Carson Ferguson made contact with Reid Wilson and Alex Murray in Turn 4.

For more information on the Bojangles' Summer Shootout Series call the Charlotte Motor Speedway ticket office at 1-800-455-FANS (3267) or visit the website.