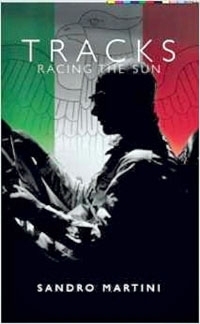 TRACKS: Racing the Sun
A book review: TRACKS: Racing the Sun by Sandro Martini– Martini's book is a historical novel taking place in grand prix and sports car racing of the late 30s through the post-war years. The book could almost be subtitled: A Window on Racing's Golden Years.

TRACKS grabs racing history by the scruff of the neck and shakes it with an outstanding narrative while grabbing the reader's attention just as firmly.

Famed racers of the era including Achille Varzi, Tazio Nuvolari, Rudolf Caracciola and Bernd Rosemeyer all play major roles in the story, with 'guest appearances' from Enzo Ferrari, Alfred Neubauer, even 'Il Duce' – Benito Mussolini himself.

Firmly grounded in the history of the era, with careful research worthy of a graduate thesis, TRACKS follows the careers and lives of the four drivers, with scandals, intrigues, historical facts and some possible artistic license.

While this reviewer is far from expert in the era's details, TRACKS appears to have all the major historic facts correct, with personal details filled in by careful research and a seamless transition to the author's inputs. What really happened behind the scenes of the Tripoli Grand Prix lottery? Why did the race even occur? What was the connection to the assassination of Archduke Franz Ferdinand, the act that triggered World War I? Those are just two of the questions in this novel of auto racing. It is beyond the scope and responsibility of a reviewer to give away the details of the narrative, but any motorsports fan worth the title owes this book a more than cursory glance. It's a worthy addition to anyone's library, whether a fan of the classic era of road racing or a modern fan. Non-racing fans will find much to like in the book as well, with a taut plot, first-person narration and characters we actually care about.

Spelled out in the words of a (fictional) Italian motorsports writer of the era, Johnny Finestrini, TRACKS  calls motor racing: "the only modern sport… but it is, ultimately, our marvelously damned attempt to dominate that which has no spirit that defines our sport as modern." This sentiment can carry over into motorsports of today, but with greatly improved safety. We have to agree with Mario Andretti's comment about the book: "Every fan of motor racing should read this book."

The Mille Miglia, Nurburgring and more all feature in the narrative. To see how politics, personal intrigue and team machinations all intertwined in racing of the era, read TRACKS for enjoyment and for education. Even if some scenes and conversations are fictional, they are close to what likely really occurred.