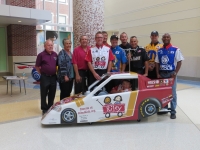 INDIANAPOLIS, Ind. (August 29, 2014) – For Terry Chandler, 2014 has been a year of giving. The New Mexico-based businesswoman and her husband, Doug Chandler, are fully funding the Don Schumacher Racing Funny Car driven by Tommy Johnson Jr., and opted to utilize the body of the 10,000 horsepower racecar to raise awareness for pre-determined charities. However, Chandler's desire to give back to the community didn't stop there. When she was introduced to the Children's Dream Racer™ cars designed and built by Mark "Smitty" Smith to provide diversion from the anxiety and boredom of doctor's visits, she quickly realized that his unique vision was something she absolutely had to share with others.

This week, she did so by donating a very special Riley Children's Foundation-themed Dream Racer to the Riley Hospital for Children at Indiana University Health.

The miniature car was built in the likeness of the full-size #RileyDreamRacer Dodge Charger R/T Funny Car that Johnson will pilot at this weekend's 60th annual NHRA U.S. Nationals at Lucas Oil Raceway at Indianapolis, NHRA's most prestigious event on the 24-race tour.

The car was built by Smitty and his team, who share a goal of helping to ease the pain and misery of kids in hospital and cancer care centers. It includes a television and video game system with steering wheel and pedals, and it also has a place for an oxygen tank and IV pole.

"I'm very touched by what Smitty has done by creating these little cars, and the Riley Dream Racer is just beautiful," said Chandler, who requested that the cars be designed in the likeness of a Funny Car instead of the traditional NASCAR style. "I hope that it will bring some enjoyment to these precious children as they go through what could be a very difficult time in their lives. It brings joy to my heart to think that we can help, even in a small way."

Riley Hospital for Children says that the car will be prominently displayed when not in use, and that it will be used and well loved by many children.

"We would like to thank Terry Chandler for donating the Riley Dream Racer," said Cara Lathrop, Vice President of Development, Riley Children's Foundation. "More than 800 outpatient visits a day are seen here at Riley Hospital for Children, and the Riley Dream Racer car will be utilized by many families while they wait for clinical care. We're very privileged and grateful to receive the Dream Racer car."