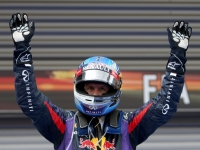 SPA-FRANCHOCHAMPS, Belgium- Only yards after the start of the beginning of Sunday’s Shell Grand Prix of Belgium, Sebastian Vettel overtook pole sitter Lewis Hamilton after Eau Rouge corner and held the lead for the rest of the race, winning by 16.8 seconds over Fernando Alonso with Hamilton taking third.

"The car was much better than we expected going into the race," he said. "We had a bit of pace in hand to control the race and I really enjoyed that a lot and I think the guys on the pit wall were not as stressed as other times. There was no rain so it was pretty easy calls to make. We are looking forward to Monza now where we don't expect to be as strong but we will see."

Vettel not only took the lead on lap one, but by the third lap, the German extended his lead to over three seconds and continued to improve it to 7.4 seconds by lap 14. At that time, Sergio Perez passed Romain Grosjean at Les Combes, pushing the Frenchman off the track which was good enough to have the Mexican serve a stop/go penalty laps later.

Vettel managed to come in for his first stop on lap 16 and continued to assume the lead, while ten laps later Kimi Raikkonen had a huge disaster in his world championship challenge as the Finn pulled off of Bus Stop corner and into the pits, retiring with no brakes left. It was the first time in many races that Raikkonen had retired in a grand prix. Three laps later at the same spot, Pastor Maldonado ran into the back of the Force India entry of Paul Di Resta retiring the Scot and having the race officials hand the Venezuelan a stop/go infraction.

Vettel came in for his second stop on lap 31, but continued his lead over the grid, with a 24 second lead over Alonso. The three time world champion continued to hold on and concluded the race with a lead of just under 17 seconds with Alonso, who had started from ninth, taking the runner-up spot.

Nico Rosberg was quiet for most of the race, but his steady driving in his Mercedes netted him fourth, while Mark Webber was fifth. Jenson Button had his best finish of the season with sixth in his McLaren, while Felipe Massa was seventh. Grosjean was eighth, while Adrian Sutil and Daniel Riccardo rounded out the top ten.

In a race that usually is marred by accidents, none severely occurred, while it did not rain at all, although there was a threat near the end of the race. Only two retirements happened in the grand prix, with Raikkonen and Caterham’s Charles Pic being the only drivers. But for Vettel, it could not have been any easier.

"It was a fantastic race for us.” Vettel explained. “From start to finish we had very good tactics and obviously it helped on the first lap to have the run on Lewis on the first lap. Once I passed him I had incredible pace and could control it until the end of the race. We were a bit afraid of the rain coming towards the end but I think it just passed the circuit."

The win at Spa was Vettel’s 31st of his career which also extends his world championship lead to 46 points over Alonso with Hamilton now in third. The competition will continued two weeks from now at Monza, Italy; Ferrari’s home ground and the final race of the European series this year.

A 14 year veteran writer who has covered race weekends for RIS for three years. Also did the same for motorsport.com, the Munich Eye, and racingnation.com.