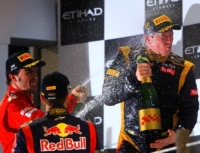 ABU DHABI, United Arab Emirates-After joining the Lotus Renault team at the start of the season after an absence from the sport for one full year, Kimi Raikkonen finally received his first win for his squad as the Finn triumphed Sunday evening at the Grand Prix of Abu Dhabi by holding off the challenge of Fernando Alonso by eight tenths of a second. Even more amazing was Series leader Sebastian Vettel, who started in last place after a penalty in qualifying, and took the last podium spot in third. Vettel now keeps his lead over Alonso in the standings by 10 points with two races to go.

“I'm very happy for the team and myself, but mainly for the team.” Said Raikkonen. “It's been a very hard season for the team and not so many easy times lately. Hopefully this will give a bit more belief and not just for the guys doing all the work but also for the guys that run the team. I hope this can turn around the tables and give us many more good races and wins - if not this year then next year as well."

The start got off to a level of high excitement as Senna and Force India’s Nico Hulkenberg tangled on the first lap, with the German retiring from the race. Other cars collided such as Romain Grosjean and Paul Di Resta, who both sustained punctures, had to pit together on the second lap. Vettel was also involved in the bunching of cars, but only came out with a slightly damaged front wing, but continued on.

But it was Lewis Hamilton who came out of this mess with the right colors. The Pole setter got off to a great start, and along with Raikkonen, went around a slow Mark Webber to take second position, with Hamilton holding a five second lead before another German, Nico Rosberg, did not see the HRT of Narain Karthekeyan slow down with an engine failure. Rosberg’s negligence did not slow him down either, and the Mercedes driver ran right into the back of the Indian, over the top of the HRT and slammed down right side up, finally running into the barriers. This mess from Rosberg’s error threw debris all over the place, and brought out the safety car for the next six laps. It ruined Hamilton’s lead, but the 2008 world champion kept his lead when the safety car pulled off, keeping his gap to 2.6 seconds over Raikkonen by lap 18.

But the Finn was hoping for a miracle and he got it when Hamilton slowed down and dropped out of the race two laps later with a fuel pressure problem, giving Raikkonen the lead for good. Alonso by this time was second, and the lead went to 5.7 seconds.

However, with the top drivers close but secured in their front positions, the cars behind them were fighting it out tooth and nail. It all came to a head just before lap 40, when Sergio Perez tried to pass Grosjean and collided with the Frenchman also involving Webber and Di Resta. Wreckage flew everywhere and Webber’s Red Bull car was damaged the most. Grosjean could not move his Lotus either, while Di Resta and Perez continued on in the race. But the incident brought out the safety car for the second and last time in the race.

When the race resumed laps later, Raikkonen hit the afterburners and shot back into the lead, but Alonso was gaining on him, while Vettel now took advantage when Button, who was in third, could not use his DRS system and lost his position for the podium when Vettel passed him with six laps to go. Raikkonen, meanwhile held off a changing Alonso to give Lotus their first win of the year after 18 tries this season. For the 2007 world champion, it was a welcome relief after becoming so steady in finishes this season.

“I was really hoping to win it before now but, as I said, I'm happy.” Added the Finn. “We still have two races to go and I try to do the same again. For sure, we are going to have a good party tonight and after a long night we will remember why we feel like that."

The world championship now heads to a track where no driver knows about--- the revival of the Grand Prix of the United States, two weeks away in a place where it has never been, in Austin, Texas.