Vettel wins in Japan; closes in on championship 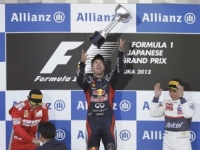 SUZUKA, Japan- After starting the season below par following two previous world titles, Sebastian Vettel proved that with only five races to go in the Formula One World Championship, he became the first driver this season to win two races in a row as the German won the Japanese Grand Prix Sunday at Suzuka easily by over 20 seconds ahead of Felipe Massa. Kamui Kobyaschi narrowly took third in front of his home crowd over Jenson Button. The win now puts Vettel within four points of Fernando Alonso in the championship.

Much of the excitement in the race took place right from the start at the first turn when Alonso was struck in the rear left tire by Kimi Raikkonen’s front wing. The impact flattened the Ferrari driver’s tire and spun the car into the dirt, stalling the engine. Up the road, Romain Grosjean struck the back left tire of Mark Webber, and spun the Australian around, although Webber’s tires were not affected. The incident gave Grosjean a stop and go penalty later on, and the Frenchman could never recover and with one lap to go, Grosjean retired is Lotus from the race. In this melee that went on, Bruno Senna and Nico Rosberg also were involved in the accident with Rosberg retiring and Senna penalized with a drive through infraction.

The incident brought out the safety car for two laps, and when the race resumed, Vettel hit the throttle, taking the lead where he increased his time to over 11 seconds on lap 18 over Massa and moving further ahead by 15 seconds on lap 33. Vettel even endured his final pit stop with a time of 2.6 seconds to remain in the lead for the rest of the race.

"It's been a fantastic weekend.” Commented Vettel. “Yesterday's qualifying was perfect and today again, the balance of the car was amazing. We didn't change too much at the stops; it just seemed to work fantastically well. I'm very happy, the guys have been pushing very hard and even though we didn't have major upgrades here, it still seemed to come together and the balance was there - and that's what made the difference today. It's a shame for Alonso, it's not something you hope for and it could happen to us at the next race. We've seen this year there are a lot of up and downs and things change quickly - we have to keep our heads down and take it step by step."