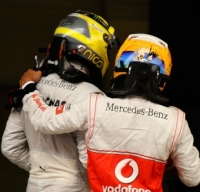 After many weeks of speculation, that saw Lewis Hamilton become the media icon from tweeting unpleasant things on his phone to not seeming to be too excited on his Italian Grand Prix victory, the 27 year old Englishman shocked many last Friday by announcing that he will leave McLaren at the end of the season and join German and close friend Nico Rosberg at Mercedes in a three year deal.

"It is now time for me to take on a fresh challenge and I am very excited to begin a new chapter racing for the MERCEDES AMG PETRONAS Formula One Team," Hamilton said. "Mercedes-Benz has such an incredible heritage in motorsport, along with a passion for winning which I share. Together, we can grow and rise to this new challenge. I believe that I can help steer the Silver Arrows to the top and achieve our joint ambitions of winning the world championships."

With Hamilton’s appearance comes the departure and uncertainty of seven time world champion Michael Schumacher, who will end his three year deal after the final race of the year in Brazil November 25th. Although Schumacher himself is to be rumored as staying on as a consultant in the road division, things might be crazier as it is rumored that three time champion Niki Lauda might step in as a consultant as well. It might be that too many former world champions could be too much for the squad. However, manager Ross Brawn nevertheless welcomed Hamilton to the team.

“I am delighted to welcome Lewis Hamilton to our team," Brawn said. "The arrival of a driver of Lewis' calibre is a testament to the standing of Mercedes-Benz in Formula One and I am proud that Lewis shares our vision and ambition for the success of the Silver Arrows. I believe that the combination of Lewis and Nico will be the most dynamic and exciting pairing on the grid next year, and I am looking forward to what we can achieve together.”

"Over the past three years, we have been putting in place the foundations and building blocks that are needed to compete regularly for the world championship. Behind the scenes, we have assembled a team that is technically stronger, more experienced and better resourced, thanks to the support of Petronas and all of our loyal team partners. The potential is now there to match any other team on the grid, which is the minimum standard for a Mercedes-Benz works team. Our task is now to translate that potential into on-track performance for next season and beyond."

With Hamilton now gone at the end of the season, already there will be a new replacement to join Jenson Button, and that is Mexican Sergio Perez, who the Woking team has snatched after it seemed that Perez himself could be the driver next season to join Fernando Alonso at Ferrari. Perez’s contract is multi year, but it certainly helps Felipe Massa, who is fighting to keep his Ferrari seat next to Alonso at the prancing horse.