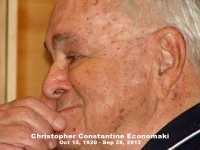 Friend, role model and good guy Chris Economaki passed away early Friday morning, joining the myriad racing stars in the firmament. Chris was a friend to all racers, whether just starting out or superstar and always cared deeply about the sport and people in it.

This writer was privileged to know Chris. I felt I had "arrived" in racing when he started chatting with me in press rooms and teasing me. He was interested in all forms of racing, evidenced by the broad range of topics in his "Editor's Notebook" columns.

Chris is survived by two daughters and two grandchildren, along with countless friends and fans from his 60 years as editor of National Speed Sport News and a broadcaster at races all over the planet. Tributes are already flooding the Internet and access to the NSSN web site is limited by the huge response.

Jeff Gordon had this to say about Economaki's passing: “It’s a huge loss, as well as Bob Newton who passed about three or four days ago.  Both of these gentlemen….when I think about my early racing career, you know…..what an impact that they made.  I mean Speed Sport News is something that I read religiously.  Chris did a lot for that newspaper and for motorsports and he was passionate about all of it.  The last time I saw him was earlier this year and still, that is all he thought about was racing.   And he cared so much about what was happening in this sport and wanted to make a difference and wanted to get those stories out there.  It’s just not very often that you come across somebody that puts their heart and soul and entire life mission into that.   So it’s a big loss as well as Bob Newton with Hoosier Tire who really changed what short track racing is today.  His efforts and that family certainly made a big impact on my life, and racing, and what I raced on for years before I ever got to the Cup series.  So two big losses this week.”