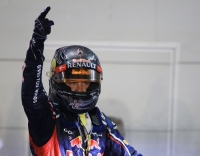 SINGAPORE-Following a race of many retirements, and a couple of safety car moments, Sebastian Vettel regained his form by taking the Singtel Grand Prix of Singapore Sunday night, ahead of second place Jenson Button and now climbs to second place in the standings, just 29 points behind Fernando Alonso, who finished third.

The start on a night which the weather has been excellent in all five years of this event, gave the chance for pole sitter Lewis Hamilton to take an easy getaway, ahead of Williams driver Pastor Maldonado. But Vettel took advantage of the Venezuelan’s poor start and rocketed into second behind the Englishman. Hamilton kept his lead and moved to just over a second and a half lead over Vettel by lap seven.

By lap 20, Hamilton increased his lead to two seconds over the current World Champion, only to have all that work come to a halt three laps later, victim of a gearbox failure. Vettel assumed the lead and kept it for the rest of the event. However, the German was challenged a few laps later as HRT’s Narain Karthekeyan struck the wall near the bridge part of the track, and the car being in the vulnerable spot, brought out the safety car, and gave Button the chance to restart the race in second position. As the drivers all pitted during this period, the restart a few laps later saw Vettel regain the lead, while the next victim was Maldonado, who was informed on his car radio that his hydraulic system had failed on lap 37. Once again, luck was not on his side.

With the racing back again on lap 40, Michael Schumacher encountered a break failure and slowed too late to avoid Jean-Eric Vergne’s Toro Rosso  entry, running right into the back of the Frenchman’s car and scattering debris all over the track, bringing out the safety car for the second and final time of the evening. Williams problems increased as Bruno Senna, who was fighting with Red Bull’s Mark Webber for the last point position in tenth, had to retire on the last lap with another hydraulic failure as his teammate. With the race at it’s maximum time of 120 minutes and one lap shorter than normal, Vettel brought his car across the line to keep himself in contention for his attempt to be the youngest driver to win three world titles at 25 years of age.

“I think it is the toughest race to be honest”. Commented Vettel.. “It is a long, difficult two hours, and the circuit is a killer. There are so many bumps and so little space for mistakes, and we benefited from a couple of small mistakes. Generally, we had a strong pace all weekend, and a good start which got us in the hunt. I am just incredibly happy, and I would like to dedicate this to a very special man—Sid Watkins, he would be remembered for sure. He is one of the reasons why we can go out onto the circuit and enjoy ourselves and be reasonably safe. The car is still competitive and we can keep pushing for the next few races.”