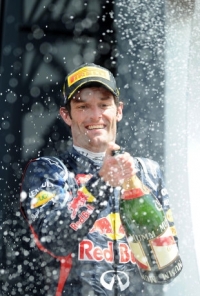 Mark Webber celebrates his second win of the season Sunday at the British Grand Prix. Photo courtesy of Press Association

SILVERSTONE, England-  Just as it seemed that Fernando Alonso looked like he would win his second consecutive race and his second straight British Grand Prix at Silverstone on Sunday afternoon, Mark Webber accelerated from being in second place most of the day, and passed the Spaniard with just four laps to go to win his second race of the season. Defending World Champion Sebastian Vettel was third.

Webber was still stunned after the race.

"It's taking a while to sink in this one,” he said. I think it was the circumstances of the race - for most of it I was marking off second place. Fernando was not quite out of touch and after the last stop, my engineer Ciaron came on the radio saying that Fernando was not doing much on the option tires. But I know Fernando is a wily old fox, I thought he was looking after the tires and just waiting to pull the pin and go a little bit. But when I got within two seconds I thought maybe he's in a little bit of trouble and it was real. It was completely game on when I knew the DRS was available, I made the move stick and our hard work paid off for the win.”

After two straight days of rain, race day was dry and sunny for the race with a small chance of a shower within an hour of the start. But if anything was stormy, it was Caterham’s Vitaly Petrov who could never get to the starting line when the Russian encountered a broken engine.

“I am obviously disappointed to have had my race end before I had even reached the grid” the Russian added. “The car suffered engine failure on my first lap out of the pitlane and I had to pull it to the side just before the entrance to the pitlane. The crew pushed it back to the garage but it was immediately clear that the problem was terminal and that was the end of the race. These things sometimes happen in racing so there is no point looking back at it - Renault Sport F1 will look at the problem and we know they will work hard to make sure we do not see a repeat of it again.”

But the start got off to a great beginning and within two laps into the race, contact was made between Romain Grosjean and Paul di Resta, with the Scotsman taking the worst of it when his Sahara Force India entry encountered a right rear flat that followed with a damaged axle that prevented di Resta from continuing any further.

Alonso and Webber continued far out in front for the next few laps and held a gap of two seconds, while Vettel, Michael Schumacher and Felipe Massa battled it out for third, fourth and fifth positions.

By lap 12, Sauber driver Sergio Perez attempted to pass Venezuelan Pastor Maldonado and tangled with the Williams driver, spinning the Mexican around and retiring him from the race. But Perez’s car was right in the middle of the DRS zone, and the officials waited for a couple of laps before the Sauber car was cleared and the area was enabled again.

Alonso held his lead for most of the race, with a five second gap on lap15. But even after the pit stops that followed, the Spaniard continued to lead, even after his final stop, which kept him in the lead by lap 40. But with a little more than ten laps to go, Webber began to have a lot of room to set fastest laps within this time period. This gave the Australian the chance to get near to Alonso and with four laps to go, Webber finally made his move to pass Alonso and take the lead for good. Afterwards, Alonso was pleased with the car, but had a bad aftertaste of what happened.

"When you do almost the entire race in the lead and you are overtaken just a few laps from the finish, it does leave something of a bitter taste in the mouth, but after reflecting for a moment and looking at the classification, then the outcome of this Grand Prix seems very positive.” Said Alonso. “We have continued working on the right road: four podiums in the last five races and the fifth just missed a few laps from the end, is a nice run of results which has allowed me to lead the Championship. This is an important moment in the season: it's not at this time that you win the championship, but one can start to lose it here and we are pleased to have extended our advantage over the majority of our closest rivals. We must continue like this for the next two races, trying to always make it to the podium. Then, we must work a lot on our top speed, especially in view of circuits like Spa and Monza. We began the race on the tires that were best for us, with the aim of pulling out as big a lead as possible over those behind, to then try and manage the situation in the final stint. We managed it with all but one of our opponents, which was actually rather predictable. In Valencia, we won on a weekend when the Red Bulls seemed uncatchable and here we fought with them right to the end. If you had told me back on Thursday that I'd be going home with 18 points to my name, I would have signed for that right away. However, the championship is still very open: Red Bull is very strong, but we definitely cannot rule out McLaren, because they had a really bad weekend here and on top of that, Lotus are always very fast. There is a lot to do, but as we have said several times, we are on the right road."

While Vettel just hung on third, Massa took fourth, his best finish so far this season, while the Lotus pair of Kimi Raikkonen and Grosjean took fifth and Sixth, respectively. Schumacher took seventh, while Bruno Senna impressed his sponsors by finishing in ninth, while McLaren did not have a good day, with Lewis Hamilton taking eighth and Jenson Button completing the race in tenth and the final point position.

Despite the setback, Alonso still leads the championship by 13 points over Webber with the next round two weeks away in Germany. But for Webber, the race in Britain was one that he was glad to entertain the fans with.

“It was a cracking grand prix today;” he concluded. The spectators got to see a good race and I'm pleased for them."