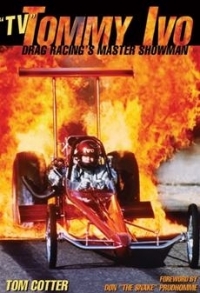 (CONCORD, NC - JUNE 16, 2011 - RIS) Remember when TV shows were something we all watched as a family? When hot rods were the subject of B-movies and magazines our parents barely tolerated? Those days gave rise to one of the stars of drag racing and Hollywood, all in one person: “TV” Tommy Ivo, the subject of Tom Cotter’s newest book: TV Tommy Ivo: Drag Racing's Master Showman.

Ivo was a child star of the early days of television, coming off the stage as a child singer/dancer to move into Hollywood movies and the earliest days of television. The future racer's credits in showbiz included Margie; Blackboard Jungle; Bomba, the Jungle Boy; the Donna Reed Show; Leave It To Beaver and Please Don’t Eat The Daisies, among many more. Ivo’s childhood acting talents were good enough that at age 12, he bought the family a house – the one where he still lives today. At age 16, he bought a new Buick Super, surprising the salesman by paying cash for the car.

That bright red 1952 Buick was the (slow) start of Ivo’s long drag racing career: the story told in Cotter’s book. How fast did Ivo run on the first run? You may well have driven faster than that commuting today. He graduated from the Buick to hot rods and eventually to some of the best-engineered and built dragsters and funny cars seen. In the days when ‘nitro’ was banned, he engineered a four-engine rail and campaigned it around the nation and winning match races and regular events.

Not just a star on the big and little screens, Ivo parlayed showbiz knowledge to build his racing business with all the little extras that attracted crowds and dollars, setting the standard for today’s touring professional racers. "When no one had mag wheels, Ivo had polished Halibrands. When guys were welding up junkyard parts, Ivo had candy apple paint jobs and chrome plating. It was Ivo who helped turn drag racing from a hobby into a profession," writes Don Prudhomme in his foreword for the book. Prudhomme was an early employe and friend of Ivo's, so his career is arguably due to Ivo's influence.

Ivo’s cars were gorgeous, but a great looking race car needs a great looking hauler – so Ivo designed a series of glass-sided trailers. These let the admiring public examine the cars without having to unload and reload at appearances, a huge time saver when multiple shows were scheduled in one day.

Told mainly in Ivo’s own words, plus tales from his friends, mechanics, competitors and others, this book is the product of many hours of interviews and is illustrated with many photographs. If you have an appreciation for the heritage of drag racing in particular, and the show business aspects of racing in general, this is also an outline of how he ran a successful team. It’s a collection of practical jokes, race car engineering concepts, international trips and showbiz episodes stirred in to spice the mix.

It's a book that, told in the words of Ivo and his many friends and competitors can be read through in one sitting, as I nearly did, or just picked up and read an episode or two at a time. Cotter's interviews with Ivo and the other contributors do a great job of telling the stories and showing the personalities behind them in a fun read about a fun person. The photos, especially of Ivo's horrendous crash and the various cars throughout his career, are scattered in the book, as are the various yarns from friends and fellow racers. This could have been a distraction but instead, the sidebar stories and photos are blended so skillfully by Cotter and the book's designers that there is no interruption in the flow.

Available from Motorbooks International and in most bookstores, TV Tommy Ivo: Drag Racing's Master Showman is a great addition to any race fan's or showbiz fan's library.

(Ivo will be the NHRA star attending the O'Reilly Auto Parts NHRA Nationals at zMAX Dragway, Sept. 15-18 later this year.)