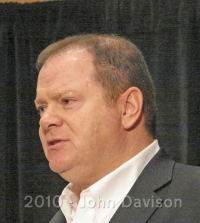 Chip Ganassi at the 2010 Media Tour

HARRISBURG, N.C. (Dec. 14, 2010) -- For the first time in the eight-year history of the Economaki Champion of Champions presented by National Speed Sport News, a non-driver has won the award.

The Economaki Champion of Champions is annually given to the North American racing champion judged to have had the best season on and off the race track.

"While we have traditionally presented this award to a driver, we felt the time was right to honor Chip Ganassi for what was truly an amazing season," said National Speed Sport News Publisher Corinne Economaki. "No team owner had ever won the Daytona 500, Indy 500 and Brickyard 400 in the same season and to win two championships on top of that made Chip an obvious choice for this honor.

"With NASCAR, IndyCar and Grand Am all part of NSSN's core coverage, Chip Ganassi and his racing teams represent a wide spectrum of competitors and racing fans."

Jamie McMurray won both the Daytona 500 and the Brickyard 400 NASCAR races for Ganassi, while Dario Franchitti claimed the Indianapolis 500 en route to earning his second-straight IZOD IndyCar Series championship and the third in a row for Chip Ganassi Racing. Finally, Scott Pruett and his co-driver Memo Rojas won nine of 12 races in securing the Grand Am championship. Juan Pablo Montoya (NASCAR) and Scott Dixon (IndyCar) also visited victory lane in Ganassi-owned race cars in 2010.

Ganassi is recognized on the cover of the Dec. 15, 2010, year-end issue of National Speed Sport News.

"I remember the first time I made one of the covers was in 1982 when I was the fastest rookie at the Indianapolis 500," Ganassi said. "I made the back cover and I'll never forget that. You literally wait for that thing to come out and then you look at it and say, 'Hey, there I am.'"

(RIS note: Before Ganassi drove Indy cars, he was involved in amateur and pro Formula Ford 1600 races, competing all over the East Coast. This writer remembers him at Charlotte in those days.)