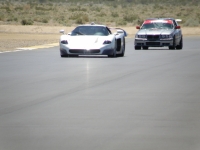 DESERT CENTER, CA -RIS- I have seen many racetracks in my years. From the tiny Speedrome on Indianapolis' east side to Laguna Seca on the California coast. Not counting drag strips or tracks that I stumbled on when they were not racing I come up with about 39. This year I added a new and very different track to my list. Chuckwalla Raceway.

You may not have heard about this track. It won't stage any large, spectator attended events. It's not a short oval with weekly programs and the occasional demolition derby. It's not a test track for some large manufacturer. That much said I would add that it may be important to the future of racing.

Chuckwalla Raceway is a newly built 2.68 mile road course built on the grounds of an old military airfield east of Palm Springs. It is all new and does not use any of the old runway or taxiway, so it avoids many of the shortcomings of airfield racetracks. It was designed strictly for the use of members and their guests as a sort of 'country club' racetrack. Runoff areas are generous and there is a minimum number of immovable objects to hit if you should get off the pavement.

I am tempted to say that this is a track for 'wanna-be' racers but that is not really it. This is a track for enthusiasts to explore what it's like to actually drive at speed. A place where you can take that sporty car you bought against both you wifes and insurance agents wishes and see, in a safe and controlled environment, what it will is really capable of. It's a place where you can learn what professionals are really coping with.

On my day at the track there were about 30 cars there. It was a mixed bag of Porsche, BMW M's, AMG Mercedes, Lotus', Corvettes and one very, very expensive Maserati MC. I was driving one of two SS Cameros on the track. There were even about four single seat formula cars which ran in there own session.

One of the things I noticed right away was that no one was talking about lap times. The time on track was spent learning the track. With 2.68 miles and 17 turns it takes some time to learn how to do more than just try and get through the next turn. After about 12 laps I was getting to the point where I knew what kind of turns to expect next. I also found that after about four laps I was pulling into the pits with my head spinning and my heart running considerably faster than normal.

There is one place on the track which you will learn to recognize and respect very quickly. Turns eight, nine and ten are a lesson in learning not to enter a turn too quickly.  You come into turn eight from a 1000 foot long straight. Eight is about a thirty degree right turn that goes into a left turn almost at once. That is turn nine. A sixty degree off camber turn which drops down hill at its exit. At this point I would expect to be turning the wheel a lot more than you had thought and wishing that you were well to the left side of the pavement instead of being on the right side of the entrance to turn ten which is a 100 degree right turn. At least on turn ten you reach the bottom of the hill which helps a little with the traction. When all this stops surprising you, you have started to learn.

The track is rented to clubs like the Alfa Romeo owners club, Porsche club and BMW club, but most of the time it will be available to the track members. As track membership grows there are plans to build two additional tracks on the property. Storage for trailers is available to members and garages are planned as membership allows. A part of the airstrip is remaining in operation for those who wish to fly in to its 4,200 foot runway. A clubhouse with pool are in the plans.

All this takes money, of course. I will be keeping an eye open for one of the days the track is rented to a club that will let me run on a weekend. If you are financially well off enough to own a $50,000 dollar car to play with than you should talk to the people at Chuckwalla Raceway about membership. They have plans for both individuals and corporate members. Check out their website- http://www.chuckwallavalleyraceway.com/ .

Oh yeah, I said this might be important to the future of racing. How is that? One of the problems racing has is that so many people have no direct contact with the sport. Most people have shot a basketball or played little league or golfed, etc. That gives them a connection to the sport and a feel for what's happening when they watch the pros go at it. Racing is much more complicated than any of those 'stick and ball' sports and yet almost no one has ever really belted themselves in and gone on a track to find out what auto racing competition is about. Chuckwalla is a place where people with little experience can find out a bit of what racing is like on a personal level. The more people have that experience, the more opportunity there will be for motorsports to grow.