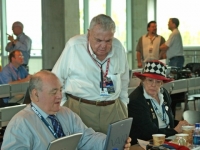 Michael F. Hollander, 61, the motorsports journalist who effectively invented online racing news reporting in 1979, passed away in September 2008 after fighting a heroic battle with a form of colon cancer external to the colon.

In 1979, Hollander worked with the then-fledgling CompuServe Information Service to provide motor sports news on a real-time basis worldwide.  By Sept. 1, 1983, that service evolved into the Auto Racing SIG and later into The Motor Sports Forum.  The service initially relied on volunteer reporters and phone calls to race tracks to get racing results, later creating a cadre of top professionals and talented amateurs.  In 1995, Hollander brought the service to the web, where it continues here today.

The service was discontinued on CompuServe not long after that service's purchase by AOL.  In addition to The Motor Sports Forum, the newswire contributes to print and online news outlets throughout the world.

He has authored two books, The Complete Datsun Guide, and The New Mazda Guide, both for the TAB Books division of McGraw-Hill.  The Datsun book led him from a career path in aerospace to one in marketing and advertising.  He worked as product information manager and later as product information director on the Nissan advertising account at William Esty Co. Inc., Advertising and at Chiat/Day Advertising.  Prior to his passing he was the manager of information resources for PCGCampbell, the 10th largest privately-held marketing communications company in the United States.  Accounts include the Wally Parks NHRA Motorsports Museum, presented by the Auto Club of So. Calif., Yokohama Tire Corporation, the Pebble Beach Concours d'Elegance and Tesla Motors, manufacturer of the high-performance electric sports car.

Hollander was the national vice-president of the American Auto Racing Writers & Broadcasters Association (AARWBA) and the secretary of the Motor Press Guild (MPG), respectively the largest organizations of motor sports and automotive journalists.  He has been honored with numerous awards for his work, including special recognition in 1995 to the Car Craft magazine Drag Racing All Star Awards; the AARWBA Dusty Brandel President's Award in 2007; the International Automotive Media Association Awards; and the AARWBA writing, photography and broadcasting contest sponsored by the Indianapolis Motor Speedway and IndyCar Racing.  He is the past chairman of the Datsun Owners Clubs Association (DOCA) and the former editor of its magazine, Datsunews.

He was the editor at large for MotoRacing and also wrote for Automotive Performance News.

He was married to Dr. Sandra Horwitz, Optometrist.  They have one daughter, Sharon.